Afghanistan is all set to be the 11th nation to play Tests and the Afghanistan Cricket Board (ACB) is finalising an itinerary for a series of matches with Zimbabwe.

Unless Ireland somehow manage to play a Test in between, Afghanistan are all set to be the 11th nation to play Test cricket. Afghanistan Cricket Board (ACB) is finalising an itinerary for a series of matches with Zimbabwe. Earlier in June, ICC had granted Ireland and Afghanistan full-member status. Afghanistan are set to play their first Test in Sharjah, one of their adopted home grounds for some time (they cannot play home matches in their country due to security issues). For the past two years, they have also played home games in Greater NOIDA, India. Recently, they beat Ireland in T20I and ODI series played there. However, due to the timing of their first Test series, most likely in the winter, Greater NOIDA can be a problem due to fog. ALSO READ: Cricket is the only thing which drives our nation , says Shahzad

We are in the final stage of discussions, it will be in the UAE, and if the tour goes ahead our first choice will be to play at Sharjah, said Shafiq Stanikzai, chief executive of the ACB in a report from The National. We are treating both UAE and India as our home venues, but in December-January Greater Noida is very foggy, and we will not be able to get a full day s play in, so that is why we are shifting it to Sharjah.

Afghanistan s debut Test will add to Sharjah Cricket Stadium s feather of feats. It already holds the record of holding most ODIs (226), having hosted its first in 1984.

Afghanistan have always pulled good crowds for matches in Sharjah. A Test match will be a morning match, on a week day, but for sure we expect there will be a good crowd, said Mazhar Khan, the Sharjah Cricket Council administrator.

Afghanistan will be without the services of head coach Lalchand Rajput, who did not want to move to Kabul. However, the Afghans are hopeful of recruiting a new coach who can see them scale at the Test level. Unlike Bangladesh, the Afghans do not want to be termed as competitors. In the next three years they plan to be within the top 10 across formats.

I don t think we will be taking long to compete with the other Test nations. Our strategic target is three years to become a competitive side. Within three years, we want to be in the top ten in all three formats of the game. So I think our first Test victory will be very much sooner, rather than later, said Stanikzai.

Sharjah has already staged 9 Tests, all involving Pakistan but has not attracted great attendance in the longer format. However, the Afghans remain highly hopeful. 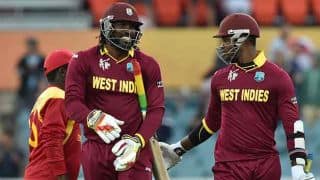