While Afghanistan eye a series win, Ireland will aim to save it when the two teams meet for one final time in the five-match series.

Afghanistan have found ways to crawl back into contest while Ireland have let the match slip away from their grasp after wresting control. It’s been the story of their five-match ODI series which is coming to a conclusion on Sunday when the two teams lock horns for the series-decider in Dehradun. A win for Afghanistan would ensure their domination over Ireland continuous across formats as it will be their fourth such win against them.

For Ireland, the contest is a chance to put into effect learning they have had in the past four ODIs, especially how to put a game to bed rather than allowing their opponents any opportunity to make a comeback.

Apart from this, their biggest Achilles heel has been inconsistent batting. The series opener saw them collapsing to be bowled out for 161, the second ODI was abandoned due to rain, in the third they made a comeback, but it was chiefly because of a maiden unbeaten century from Andrew Balbirnie. The worst came in fourth ODI on Friday when they were skittled for 114 in chase of 224.

Clearly, batting needs a massive improvement if they want to avoid a series defeat.

What: Afghanistan vs Ireland, 5th ODI

Weather: Sunny with a high of 23 degrees

Ireland need to bolster their batting. While it’s best not to experiment too much in crunch games, they desperate times call for desperate measures. They might drop struggling wicketkeeper-batsman Stuart Poynter [11 runs in three innings] for rookie Lorcan Tucker.

Despite struggling at 131/7 at one stage, Afghanistan dug deep to post 223- all out in the fourth ODI before eventually winning by 109 runs. While batting remains a bit of a concern, they wouldn’t want to disturb the winning combination. However, captain Asghar Afghan did say they might be willing to experiment on Sunday. There’s no word on the fitness of Afghan though who did not take field on Friday after a collision with Poynter.

“I am disappointed with the batting. We managed to lose wickets throughout. We didn t do the basics right. There s not a lot to do in a day, just need to get into the nets and do our best.” – William Porterfield

“The top-order batsmen didn t play well but Rashid (batting at number nine) did the job for us, Afghan said of his man of the match leg-spinner. We can give a chance to other players in the next match.” Asghar Afghan 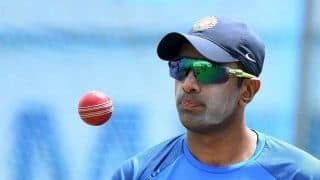