The series is poised at 2-2 with all to play for Ireland and Afghanistan at Greater Noida Sports Complex.

Afghanistan prevailed in the series opener. They made it 2-0 after the second match. Ireland managed to win their first game on tour and made it 1-2 in the third ODI. The Irishmen again had the last laugh in an intense penultimate tie to level the series 2-2. The four ODIs have been competitive and give a sneak peek into what is in store for the fifth match, a decider, on Friday. With all to play for and not much to separate between both the sides, let us walk through which team holds ‘momentum’ ahead of the final encounter here at Greater NOIDA. Full Cricket Scorecard, Afghanistan vs Ireland, 5th ODI

After the whitewash in T20Is, Afghanistan continued their dream run by winning the first two ODIs. Ireland had nothing going their way. Even luck evaded them. Paul Stirling was wrongly adjudged lbw on 95 in a steep chase of 339 in the second ODI. His dismissal pulled things back in control for the Asian side. To top it all, Ireland had no clue how to tackle Rashid Khan. Till the second ODI, Rashid had taken 19 wickets in the tour (9 in T20Is) to frustrate the Irish camp. Their bowlers, in absence of Boyd Rankin, were taken to the cleaners and middle order crumbled in tight situations.

However, by committing repetitive flaws, William Porterfield’s side finally managed to overcome the barriers in the third ODI. This was their first do-or-die game in a bid to keep the series alive. Their bowlers stood up; restricting Afghanistan to 97 for 6, Ireland were on top. Chasing 265, their batsmen prevented the usual middle order blip to earn a 6-wicket win. The script remained the same in the fourth game as well.

Having Afghanistan caught in a fix at 83 for 7, Ireland came out to chase 221. Despite regular breakthroughs, Porterfield had the last laugh courtesy a 3-wicket victory, riding on Kevin O’Brien’s all-round show (72 not out and 4-for). Anyone can predict that ‘momentum’ is with Ireland but that is not the case. Kevin had a tough time taking his side home on Wednesday. He experienced cramps (returning from hamstring injury) in his unbeaten innings and will undergo check-up ahead of the finale. If he misses out, Ireland will have to begin from square one in what will be their captain, Porterfield’s 100th ODI.

On the other hand, Afghanistan have slipped in the last two matches. Well, this was always coming. A side cannot be expected to triumph on every occasion. Their top and middle order clicked, pacers got vital scalps and spinners, in particular, Rashid, ran through Irish’s batting line-up. However, all this came to an end in the last two clashes. Their top batsmen faltered and spinners were deal with much care.

Nonetheless, Afghanistan’s lower order came to the party in the last two drubbings. The third ODI saw the last 4 wickets adding 167 runs (off 143 balls), whereas they scored 137 runs in 26 overs in the last match as well. By all means, their batting has more depth compared to the opponents. In the bowling department, Afghanistan have more experience and if Kevin is ruled out on Friday, this will make them overwhelming favourites.

Afghanistan’s line-up will be more than ready for the last battle. After failing in the last two games, they will be charged up. After all, there were in a similar spot in their last series versus Zimbabwe. From a healthy 2-0 lead, they headed to the fifth ODI, at 2-2, and emerged victorious with ease. The likes of Mohammad Shahzad, Rahmat Shah, Dawlat Zadran and Rashid will be expected to come good.

But wait, same can be said for in-form player Stirling, Porterfield, Gary Wilson and a fully-fit Kevin from the Irish dugout. It seems like both the sides will start from the same line; with momentum ‘equally shared’. Expect another high-scoring and intense tie with all boiling down to the last few overs. 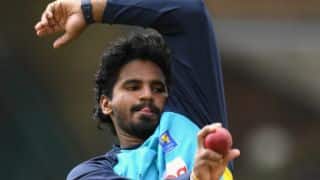 Bangladesh vs Sri Lanka: Kusal Perera ruled out of first 2 ODIs due to injury