Umar Gul strikes as Afghanistan got off to a rollicking start in chase of 249.

Afghanistan lost the wicket of Mohammad Shahzad early in chase of 249 against Pakistan in the third match of the Asia Cup 2014 at Fatullah on Thursday. Shahzad was caught behind for nine off Umar Gul’s bowling. Afghanistan are 39 for one after eight overs.

Afghanistan had got off to a rollicking start with Shahzad flicking the first ball of the match for a boundary. However, it was Noor Ali who did most of the scoring playing some stylish glances and on-drives. The pacers looked ineffective as the pitch offered no movement and there was hardly any swing as well.

Just when it looked the pacers were being taken for a ride, Shahzad got a short of good length ball which rose on him and probably got a feather edge off the bat on it way to the wicketkeeper’s gloves. Umpire Billy Bowden took a lot of time before raising his crooked finger. 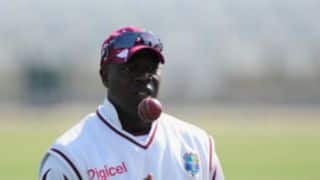