SHarjeel throws his wicket away trying to be too aggressive.

Afghanistan got the first breakthrough in the form of Sharjeel Khan who was dismissed for 25 in the third Asia Cup 2014 match at Fatullah. Pakistan had made a steady start with the openers sharing a fifty run partnership. Pakistan are 64 for one on 16 overs. Ahmed Shehzad is batting on 33.

Sharjeel tried to slog a delivery from left-arm spinner Hamza Hotak and was caught in the deep by Noor Ali. Earlier, Sharjeel had survived a close caught behind call of Dawlat’s bowling. Dawlat had pitched it a touch short on the leg-side and he instinctively went for the pull and gloved it before the keeper caught it. The umpire though was unmoved and Sharjeel had survived.

Mohammad Hafeez came in to bat at No 3 and keep the score moving along with Ahmed Shehzad who got off to a fluent start. Spinner Hotak was impressive getting the ball to turn and beat Hafeez on the defense.

Afghanistan had won the toss and inserted Pakistan into bat. This is Afghanistan’s maiden appearance in the Asia Cup. 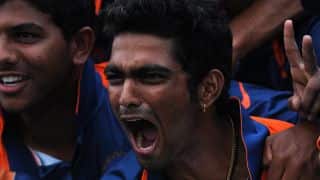