Statistical highlights of the Asia Cup match between Pakistan and Afghanistan.

Statistical highlights of the Asia Cup match between Pakistan and Afghanistan.

# Hafeez’s bowling record in ODIs in Bangladesh is excellent. He has captured 14 wickets at an average of 21.42 in ten matches.

# Ahmed Shehzad (50) recorded his maiden fifty at the Asia Cup. He has registered three hundreds and five fifties in a winning cause — four centuries and six fifties overall in ODIs.

# Misbah-ul-Haq posted his second duck as captain — his fifth in Limited-Overs Internationals.

# On both the occasions, Misbah was ‘run-out’ without facing a ball and became the first captain to be dismissed twice in this way in ODIs. Wasim Akram and Ricky Ponting were dismissed once each in this fashion.

# For Pakistan, six centuries have been recorded by number six batsmen in ODIs. Umar Akmal and Shahid Afridi have registered two hundreds each and Abdul Razzaq and Mohammad Yousuf have recorded one each.

# Akmal has been adjudged the Man of the Match for the sixth time in ODIs.

# Samiullah Shenwari, with 35 wickets at 25.48 runs apiece in 29 matches, is the top wicket-taker for Afghanistan in ODIs.

# For Pakistan, an opening partnership of fifty or more has been registered in 11 ODIs. 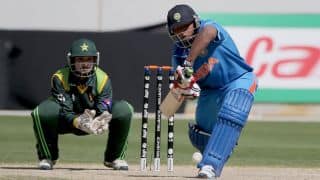 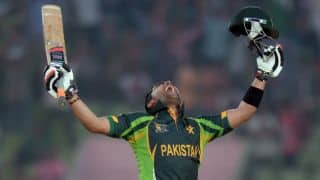