Zimbabwe take on Afghanistan in the fourth of the five-match One-Day International (ODI) series at the Sharjah.

Minnows Zimbabwe take on fellow minnows Afghanistan in the fourth of the five-match One-Day International (ODI) series at the Sharjah Cricket Association Stadium on Monday. Zimbabwe, who saved themselves from losing yet another series, won the all-important tie against Afghanistan as they bounced back impressively and put up a steallr show to beat them convincingly by 117 runs, and stay alive in the series. They would aim to win this toe as well and level terms as well as set up the stage for an interesting decider. However, Afghanistan would aim for a turnaorund as well as they aim to win this tie and seal things here before moving into the final game. LIVE CRICKET SCORECARD: Afghanistan vs Zimbabwe 2015-16, 4th ODI at Sharjah

With this tie, and being played at the same venue, it can be expected that the pitch will behave in a neutral fashion, supporting both batsmen and the bowlers. As for Zimbabwe, their batting has been an issue in the series so far and would definitely look to make a couple of changes or even more in the order, with Peter Moor and Chamu Chibhabha likely to be on the receiving end owing to their poor show in the last match. While for Afghanistan, their batting line-up might also need an overhaul, with most of the batsmen failing to perform on Saturday. However, it could also be the other way, with the skipper sticking with the same squad as one bad game is enough to press the panic button. LIVE CRICKET UPDATES: Afghanistan vs Zimbabwe 2015-16, 4th ODI at Sharjah 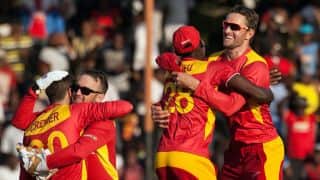