Kabir Khan is confident of Afghanistan impressing at the big event next year.

Afghanistan‘s coach said on Wednesday the team was on course for next year’s World Cup and looking forward to touring Australia and New Zealand next month. Afghanistan earned a maiden berth in the 50-over World Cup to cap a remarkable rise which saw them graduating from division five in the World Cricket League in 2008. Having learnt the game in refugee camps in Pakistan during the Soviet occupation of the 1980s, Afghanistan have played in two World Twenty20 competitions and have won hearts with their progress. Their coach Kabir Khan said the team was well set for the World Cup.

“We had a good tour of Zimbabwe last month, where we showed a lot of resilience by squaring a four-match series 2-2 after losing the first two games, and that was remarkable,” Khan told AFP by phone from the northwestern Pakistani city of Peshawar. Khan said his players are excited at the prospect of touring the World Cup co-hosts. “We will be touring Australia and New Zealand from September 13 where we will play several matches against state sides and I am sure that will further mature the players for the World Cup,” said Khan, who played four Tests and 10 one-day games for Pakistan in the 1990s.

Afghanistan are in Group A of the 14-team World Cup and face Bangladesh in their opening match in Canberra on February 18. They also have former champions Australia, New Zealand, Sri Lanka, England and Scotland in their group. Holders India, Pakistan, South Africa, Zimbabwe, Ireland, the West Indies and the United Arab Emirates make up Group B. Afghanistan can take heart from their win over Bangladesh — their first over a Test-playing country — in the Asia Cup earlier this year.

Khan warned his players will need to raise their game in unfamiliar conditions Down Under. “The real test will be in Australia where teams from Pakistan, India and Sri Lanka have struggled. So the true skill of our players will be tested on the bouncy tracks of Australia as we will be playing practice games at Perth where the ball bounces the most,” said Khan. Khan said his players would gather in Dubai on September 4 for a training camp before the Australia-New Zealand tour.

“We are leaving no stone unturned to show that we belong to the cricket world, and for the World Cup I am sure we will get noticed,” he said. 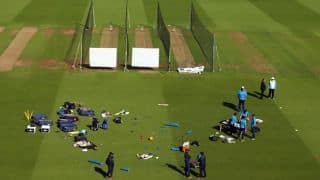 Ravi Shastri as India's Director of Cricket: What does this role entail?