Shahid Afridi had approached Wasim Akram for advise before being sacked as skipper in the wake of his outburst against coach Waqar Younis, the Pakistani fast bowling great has revealed. 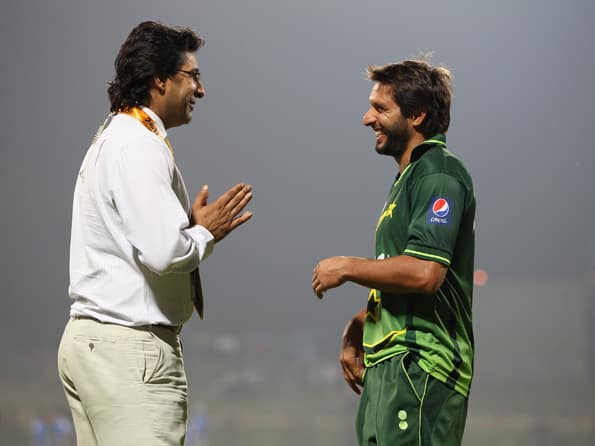 Shahid Afridi had approached Wasim Akram for advise before being sacked as skipper in the wake of his outburst against coach Waqar Younis, the Pakistani fast bowling great has revealed. However, the damage, by his comments, had been done as the PCB chose Misbah-ul-haq to lead the side in the ODI series against Ireland.

“Afridi called me to tell that he had spoken against Waqar and asked me what should I do? I told him do this… do that, (but) the next day he was sacked,” the former left-arm pacer said during the launch of a book yesterday. The book — The Winning Way — has been written by noted sports commentator Harsha Bhogle and advertising and communication consultant Anita Bhogle.

Afridi last week had spelt out his problems with Waqar over team selection issues after returning home from the West Indies. Akram blamed both the PCB and the lack of consistency in the national team for Pakistan’s failure to dominate world cricket despite having good players.

“Passion is not the reason (why Pakistan can’t dominate). There is a lot of passion, but it is the lack of consistency from the team as well as the PCB. It affects the whole system. As a captain you have to know your players, but in Pakistan you also have to know the PCB Chairman,” he said sarcastically.

On whether he had spoken to Lakshmipathy Balaji, who was hit for 23 runs in the last over by Mumbai Indians batsmen who needed 21 to win an IPL match yesterday, Akram, bowling coach of Kolkata Knight Riders, replied in the negative.

“I haven’t spoken yet. I thought it was the field setting. There is no point in telling the youngster that there was something wrong,” he asserted.