The Chairman of the PCB, Ijaz Butt has made it clear that the former Pakistan One-day skipper Shahid Afridi is no longer a captaincy material for the PCB. 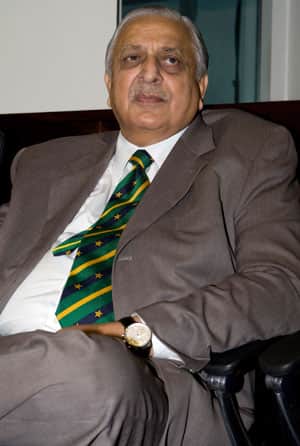 The Chairman of the PCB, Ijaz Butt has made it clear that the former Pakistan One-Day skipper Shahid Afridi is no longer a captaincy material for the PCB.

“As far as I am concerned, Afridi is no longer a captaincy material for the PCB,” Ijaz Butt told the ‘Geo Super‘ channel in an interview last night.

“In my opinion, which may be considered by some people as wrong, he (Afridi) was responsible for us losing the last two One-Day Internationals in the West Indies,” he added.

The much publicised conflict between Afridi and the Board started when the PCB Chairman removed the flamboyant allrounder as captain of the national One-day team for the series against Ireland in May, although he was retained in the side as a player.

The decision to remove Afridi was taken on basis of a report from team manager Intikhab Alam, who blamed him for spoiling the team spirit by walking out of team meetings before the last two ODIs against the West Indies.

Afridi then announced his retirement in protest and lashed out at the board, resulting in the PCB initiating disciplinary action against him that included suspension of his central contract and revoking NOC issued to him to play in England.

Thereafter, Afridi went to the court to restrain the board from taking action against him.

But after the dispute generated political interference, the allrounder finally withdrew his case and appeared before the disciplinary committee of the board, which fined him 4.5 million rupees for breaching the code of conduct, but also recommended the board to issue him the NOC to go and play for Hampshire in England.

Before leaving for England, Afridi said that his career was still not over and in due course of time he could make a comeback to the national team.

Speaking at length on the conflict, Butt said that as far as the PCB was concerned, Afridi was no longer a contracted player and “once the West Indies tour ended as per our policy he was no longer the captain”.

“Look as far as we are concerned he has retired from cricket although he didn’t inform us about his retirement decision as per the code of conduct. He is no more on our contract list so I find it surprising to hear him say he will make a comeback for Pakistan,” the former Test player said.

Butt also admitted there was great political interference during the conflict between Afridi and the Board.

“It was disappointing the issue was politicised. I point blank refused to everyone to pardon him. I told them I will not budge unless he (Afridi) follows the disciplinary process and I only met him when he agreed to appear before the disciplinary committee,” Butt said.

The PCB Chairman also said the Governor of Sindh had spoken to him for one hour on the issue and opposition leader Nawaz Sharif had also called him up.

“Governor told me to give NOC to Afridi. But I told him that I have committed to the new ICC code of conduct and Afridi has to appear before the disciplinary committee and he has to go through the code of conduct process.

“Nawaz Sharif also called me up and I told him this is not a political issue. I told him we (PCB) are not part of any politics, I think politicians get involved in cricket because it is a big thing in Pakistan and they get mileage,” he said.

“We had told him we were comfortable with having one captain for all three formats. But he said make me captain.

And then he just announced his retirement after Lord’s Test without speaking to me although I was there. In any other country he would never have played again as such things are not done anywhere else but we still gave him a chance.”

Butt said that whether right or wrong PCB had a laid down policy to announce the captain after every tour.

He said he had no doubt that some people had given wrong advice to Afridi in the recent dispute.

“I also want to make it clear there was no pressure on me to settle things with him. I am not one of those who take pressure,” he said.

Butt insisted that allegation that the PCB does not give respect to players, is not correct.

“Although he (Afridi) could approach me for anything but he never approached. Why would I want to change a successful captain,” said Butt.