Dhapola’s impressive bowling effort saw him become Uttarakhand’s first wicket-taker in first-class cricket in the very first over and the first to register a five-wicket haul for the state in under 13 overs. Crucially, it helped Uttarakhand bundle out Bihar for just 60 at the Rajiv Gandhi International Stadium in Dehradun on Thursday.

But, despite such a fine start, the 26-year-old is focussed at doing the job for the team.

“This 6/13 is a thing of past now, the main aim to do well for the team,” Dhapola told CricketCountry after the day’s play.

The Rajat Bhatia-led side laid out a green top for the visitors to counter Bihar’s spin-heavy bowling attack, but winning the toss and Dhapola’s six wickets handed them a huge advantage.

“It was green top and winning that toss was beneficial for us. The idea was to bowl in the good areas,” said Dhapola, who had claimed 14 wickets in the Vijay Hazare Trophy at 13.50 apiece. “We had lost to them in the one-day format, so we really wanted to win. We knew we had a strong pace attack and the pitch suited us and the plan was to pitch the ball in good areas, and once up do that the ball will move on tracks like this one.”

Dhapola, born and raised in Uttarakhand, has been playing cricket in Delhi for over nine years under the tutelage of Rajkumar Sharma – Virat Kohli’s childhood coach. A product of the West Delhi Cricket Academy, Dhapola was also on the Ranji Trophy standby list for Delhi in the 2016-17 season. He didn’t get a chance then, but two years on, the pacer had made his Ranji debut and hopes to finish the season with a good haul of wickets.

“My aim is to take at least 50-plus wickets,” said Dhapola, who idolises South Africa’s Dale Steyn. “I have played days cricket in Kolkata before where I took 45 wickets in nine matches, and 52 in a season. So I know can do that. The target is there and hopefully I can get to that by the end of the season. It has been a good start, but I can’t satisfied with it, I am hungry for wickets.” 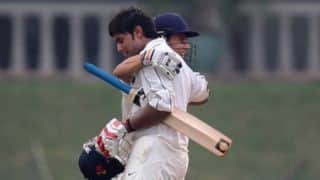 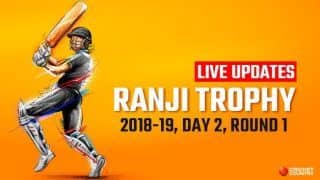