Nortje, who made his ODI debut in the recently-concluded series against Sri Lanka, finished with 8 wickets from four games at an impressive average of 18.75.

Nothing seems to be going right for Kolkata Knight Riders (KKR) before the Indian Premier League (IPL 2019). After Kamlesh Nagarkoti and Shivam Mavi, KKR have now lost their third pacer Anrich Nortje who has been ruled out of this season after sustaining a shoulder injury.

The 25-year-old fast bowler, who was pocketed for his base price of INR 20 lakh, came into the spotlight during last year’s Mzansi Super League where he snapped eight wickets from three games at an economy of 6.91. His ability to bowl at high pace grabbed eyeballs of the KKR scouts despite being sidelined during the IPL auction with an ankle injury. (ALSO READ: I don’t see Virat Kohli as a shrewd franchise captain: Gautam Gambhir)

Nortje, who made his ODI debut in the recently-concluded series against Sri Lanka finished with 8 wickets from four games at an impressive average of 18.75. His performance saw him being retained for the three-match T20I series, but he was not included in the thrilling opener at Newlands on Tuesday. (ALSO READ: Miller, Tahir star as South Africa prevail in Super Over)

KKR are now left with a 20-member squad. They have already replaced Nagarkoti and Mavi with Sandeep Warrier and KC Cariappa. 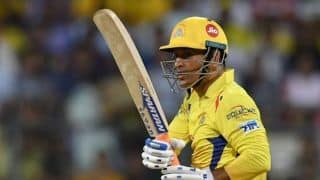