World XI have their task cut out in pursuit of 184 vs Pakistan.

Pakistan amassed 12 runs off the first over. Samuel Badree and Morne Morkel erred their lengths and offered lots of freebies. As a result, Fakhar Zaman and Ahmed Shehzad added 50 runs for the first wicket in 6 overs. Zaman’s tame dismissal curbed the run-flow, but Shehzad and Babar Azam rode Pakistan to 183 for 4 in the series decider of the Independence Cup against World XI. Shoaib Malik, as usual, played a part in final flourish with an unbeaten 17.

Opting to bowl, Faf du Plessis stressed on the advantage of power hitters in his line-up. “Our batting is the X-factor for us. If you look at the power hitting we have, it is a big factor in this format. I love to try and take wickets; keep thinking from the bowler s perspective to take wickets.” He seemed confident of chasing any score, but would be disappointed with Morkel and Badree. They offered width and bowled on the pads to give away easy runs. In short, Zaman and Shehzad got going in no time.

Four bowlers were used inside 6 overs. Yet, there was no breakthrough. There was desperation in the visitors’ camp. Finally, World XI had something to cheer in the 9th over. Sammy’s run-out of Zaman was followed by some dry overs. Nonetheless, two in-form players, in Azam and Shehzad, went about their business in usual manner and got runs on loose deliveries. The duo added 102 runs together, with Azam scoring at will. Shehzad was much-better than his characteristic run-a-ball-knocks, and turned the heat in the death overs.

Shehzad was 70 off 51 in 17 overs before shifting gears from thereon. He smashed three consecutive sixes to Ben Cutting and powered his way to an impressive 89. However, he was dismissed in the last ball of the same over; courtesy another run-out. Azam and Malik posted a competitive score; throwing a stiff challenge to Faf’s ‘power-hitters’. 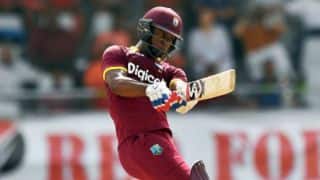