Currently, India are 115 for the loss of three wickets in 28 overs with opener, Rohit Sharma batting on 56.

Indian batsman, Ajinkya Rahane is dismissed for 19 by Taskin Ahmed after being caught by Shakib Al Hasan at mid off, against minnows, Bangladesh, in the 2nd quarter-final of the ICC Cricket World Cup 2015 at the Melbourne Cricket Ground (MCG) in Melbourne on Thursday. Currently, India are 115 for the loss of three wickets in 28 overs with opener, Rohit Sharma batting on 56 and Suresh Raina coming in. Live Updates: India vs Bangladesh 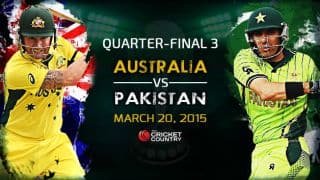 Australia vs Pakistan, ICC Cricket World Cup 2015 quarter-final 3 at Adelaide preview: An efficient machine takes on a band of mavericks