Virat Kohli dropped a bombshell at the toss. The team sheet did not have vice-captain Ajinkya Rahane in the XI.

India tour of South Africa commenced on Friday. South Africa won the toss, elected to bat and Bhuvneshwar Kumar destroyed their top order. Virat Kohli dropped a bombshell at the toss. The team sheet did not have vice-captain Ajinkya Rahane in the XI. Rahane has been India’s best batsman overseas, but form has eluded him in the recent past.

Rahane, who led India to the Dharamsala Test win last year, had a miserable run with the red ball. He managed 49, 0, 45 and 0 for Mumbai in the Ranji Trophy and flopped against Sri Lanka. While his colleagues feasted on the Lankan bowling, Rahane managed only 17 runs from 5 innings.

I agree Rohit Sharma is in smoking form but that still does not, IMHO, warrant dropping Rahane!! #IndvsSA

The rise of Rohit Sharma in Indian cricket is acceptable but the fall of Ajinkya Rahane should not be by any means.#INDvSA

This might be the end of Ajinkya Rahane's career. Was never considered for T20s. In ODIs he is a backup opener. Tests was something made for him but if Rohit Sharma performs in this match then goodbye Rahane from tests too. So sad #SAvIND

Dropping Ajinkya Rahane has to one of the most stupidest decisions. You don’t want to drop a player because he had one bad series, that crushes his confidence completely. Plus dropping a vice captain doesn’t seem right. #SAvIND #INDvSA @ESPNcricinfo

I love Rohit more than anyone. But he shouldn’t play ahead of Rahane.

Really don't understand the fuss over selection. Captain and coach have always said that they'll pick those in form. And Rahane's overseas runs were more than three years ago. Frankly, this team management has earned the right to pick Coco the Clown if they want to. #SAvIND

Wow, this Indian team not short of surprises. But they are backing words with actions. Playing the all-rounder and no Rahane is a huge call

Ajinkya Rahane's average of 54.66 in Tests outside Asia is the best among all the Indian batsmen. (Min.10 Tests played outside Asia) #INDvSA

Rahane dropped. Pandya in, Bumrah debut as 3rd pacer. This is a mad-hoc selection on the face of it. #SAvInd

Choosing flat track bully of limited over’s cricket over a test specialist like Rahane who have scored runs in alien conditions. Only possible in India #SAvIND

Rohit Sharma’s inclusion may raise eyebrows, but he has been in exceptional form across formats. He scored 217 runs against Sri Lanka from 3 innings. In the last tour, he registered his third ODI double-hundred and the joint-fastest T20I hundred. 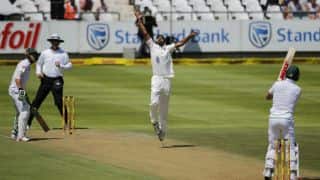