Ajinkya Rahane says I don't think any format is harder, it has its own challenges

Ajinkya Rahane is the best candidate to fill in the shoes of former Indian middle order batsman Rahul Dravid. He has been in good form lately and deserves the chance to become the Vice- captain of Team India. The batsman from Mumbai made his Test debut in 2013 and has performed consistently. He has a a sound technique and hence the best candidate to lead the Test side alongside his captain Virat Kohli. He failed to make any impact in the debut but returned back to the side with more commitment. He scored two consecutive centuries, helping India to win against South Africa in 2015. Rahane has currently 6 centuries under his name. He is looking forward to his new role in Tests as he talks about the challenges he needs to overcome during an interview with Cricbuzz. ALSO READ: Ajinkya Rahane’s ascension as India vice-captain for West Indies tour signals shift in leadership prerequisites

What are your thoughts after being appointed as Team India’s Vice Captain in Tests?

What key areas you will be looking forward to as Vice Captain?

How do you feel about the competition for a place in Indian side?

We will discuss (team set-up) once we land in the West Indies. It’s good to have competition in our team. We have been doing really well in Test cricket. As a young unit, we are enjoying each others’ success and we are playing for the team. I think, that is really important for the team’s success. We will go there, see the conditions and play according to them.

You have played a lot of Test matches this year, how important do you think it is for Team India to tout on a regular basis?

See, I think, every tour has a different challenge. Every tour is equally important and it’s important to prepare well before each and every series. I think once we go there, how we adapt to the conditions, the wickets and the weather – that will be the key for us.

How would you go about choosing the areas which need focus?

How do you make the transition of one format of game to another?

Which transition is the hardest for you? Tests to T20s or vice versa?

I don’t think any format is harder. It has its own challenges – Tests, ODIs and T20s. But, as I said, how you react to them and how you adjust to all the formats is most important.

You have always tried to stick to you basics, no matter if it’s a T20, Tests or ODI. How do you continue to do that?

Every player has their own style. I don’t like to copy anyone, I stick to my game – which is to take my time the bat. Even in T20s, I always like to take my time. Then I back my instincts and play my game. Even here, I will do that. Tests, you have much more time than T20 cricket. Patience will be the key. I will stick to my game and I will continue doing that.

Last time England toured India, they won. Are you looking to return the favour this time around

What are the goals you are looking to set for yourselves?

Just to play match by match. Keep contributing to the team, and keep that consistency going. 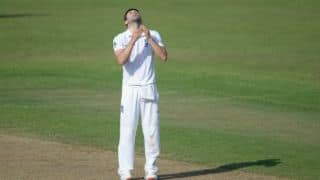