India started the day against South Africa at 231 for 7.

India go to tea at 326  for 8 in fourth Test, Day 4 at Delhi. Ajinkya Rahane scored his first century on home soil but he was eventually dismissed for 127 as he was dismissed by Imran Tahir. Rahane and Ravichandran Ashwin put on 98 for the eighth wicket, which took India past the 300-run mark. Ashwin has scored his sixth half-century and he has looked comfortable. Ashwin has Umesh Yadav for company at the crease, who is no mug with the bat either. He scored a superb century recently in the Ranji Trophy 2015-16. India resumed the day at 231 for 7 and will be delighted at the end of the first session as they have lost only one wicket. Live Cricket Scorecard: India vs South Africa 2015, 4th Test at Delhi

South Africa would have hoped to wrap up the innings early on Day Two, but that just has not happened yet. The bowers have toiled hard, but have not been able to get the breakthroughs. Dane Piedt, who bowled magnificently well on Day One, has not managed to have any impact yet. South Africa will hope that he can cause some damages in the second session, just as he did on Day One. India will now hope to get a score in excess of 350 and look to secure a huge lead by bowling South Africa out early. Live cricket updates: India vs South Africa 2015, 4th Test, Day 2 at Delhi

Ashwin and Ravindra Jadeja are the leading wicket-takers for India in this series and will look to add to their tally once they get a chance to bowl. South Africa batsmen have been short of runs in this series. Barring AB de Villiers, nobody has performed well with the bat. Players like Hashim Amla, Faf du Plessis and JP Duminy will look to spend time at the crease once they get the chance. India are however firm favourites at this point as they have enough runs on the board at the moment.

India made a slow yet steady start to their innings on Day One. But they lost a few quick wickets in between. Rahane then stitched a 70-run stand with his skipper Virat Kohi, which steadied the innings to a certain extent. After Kohli was dismissed, India lost Rohit Sharma and Wriddhiman Saha in quick succession to land India in a spot of bother. Rahane then put on 59 with Ravindra Jadeja for the seventh wicket, which took India to a much better position. Ashwin and Rahane then continued to frustrate the bowlers and did not give anything away as they piled on the runs.

On Day One, India had won the toss and elected to bat first. India have made a change to their side as Amit Mishra misses out and Umesh Yadav has been included in his place. South Africa too have made a few changes. They have roped in Piedt, Abbott and Temba Bavuma in place of Kagiso Rabada, Simon Harmer and Stiaan Van Zyl. 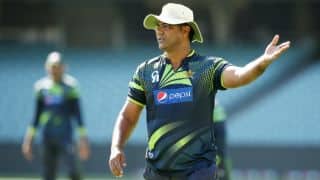