The Men in Blue will have another practice game on February 10 against Afghanistan.

Akshar Patel, who grabbed attention with his effective left-arm spin bowling for India in the recent ODI series against Sri Lanka, today insisted he was a batsman who could bowl.

Patel played a blistering knock of 64 not out against South Zone to pilot West Zone into the Deodhar Trophy final.

“People have been telling me you are a bowling all-rounder and cannot bat. I entered the game as a batsman. I concentrated more on my bowling when I went to the NCA in 2011-12. I have always said that I can bat and I have proved it often on the field,” said the Gujarat youngster after being named Man of the Match for his splendid 38-ball innings.

“I started my career as an opening batsman. In NCA (2011-12 under 19 camp) I was told by (coaches) V Venkatram and Dinesh Nanavati that I will be in the bowling group. Now it has become an advantage,” he explained.

“It (today’s innings) was important and it will show that I can bat as well. The knock says it all,” he added.

The left-handed Patel knocked the stuffing out of South bowlers in tandem with Suryakumar Yadav (80), as the two rallied West from a tottering 174 for six with a stand of 70.

Yadav departed at 244 but Patel stayed till the end and ensured West would remain in contention for their fourth straight title against East Zone on December 3 with another crucial unbroken stand of 50 runs with Shardul Thakur.

“After Surya got out I was thinking about taking the team as close to the target as possible because Dhawal Kulkarni and Shardul Thakur can bat and give me a stand. And I wanted to stay and play till the 48-49th over.

“We did well in the power play (adding 67 runs while losing Yadav’s wicket) and came back into the game. But obviously when Surya got out it felt that we were again a little out of the game. But then Shardul came in and gave me a good stand and it became easy.”

Patel said that his stint with the Indian squad and encouraging words from Virat Kohli has boosted his confidence.

“Playing for India gives the confidence a boost and teaches you to play under pressure and it helps in matches like today. Virat Kohli too appreciated me so that too (is a confidence booster),” he said.

“I am happy that I am doing well with the bat and the ball. I am working on the arm-ball. And in batting too, I am strong square of the wicket, so am working on drives etc.”

Patel said he was currently taking it one match at a time and not thinking about playing in the 2015 World Cup.

“Obviously it (World Cup) is on the radar but I am not thinking about it. I am looking at things match by match and focusing on the tournaments that I am playing. Then there is Ranji Trophy. If I do well there will be a chance,” he said. 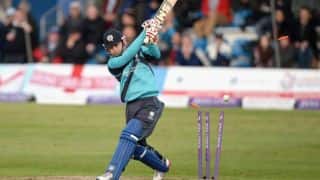