Akshar Patel allowed KXIP registered a convincing 23-run win over hosts GL, in Match 28 of the ongoing IPL 2016, at Rajkot.

Visitors Kings XI Punjab (KXIP) all-rounder Akshar Patel claimed his maiden hat-trick, as KXIP registered a convincing 23-run win over hosts Gujarat Lions (GL), in Match 28 of the ongoing Indian Premier League (IPL) 2016, at the Saurashtra Cricket Association Stadium in Rajkot on Sunday. James Faulkner was the highest scorer from GL as he scored 32, while Akshar claimed four for 21. Earlier, GL skipper Suresh Raina won the toss and elected to field first, as KXIP posted an above average total of 154, after being shot out in 20 overs, courtesy of skipper and opener Murali Vijay’s 55, while Shival Kaushal claimed three wickets. FULL CRICKET SCORECARD: Gujarat Lions vs Kings XI Punjab, IPL 2016 at Rajkot

GL started their chase a shaky not as the openers in the form of Dwayne Smith and Brendon McCullum could only manage 13 runs, as McCullum fell for a mere single to Mohit Sharma, who bowled him up in the second over. It was followed by a brief 21-run stand between Smith and skipper Raina, before Raina fell for just 18 to Mohit again in the fifth over. Following his dismissal, there were hardly any partnerships, as all-rounder Akshar Patel tightened the screws. FULL CRICKET UPDATES: Gujarat Lions vs Kings XI Punjab, IPL 2016 at Rajkot

At the score of 38, it was Smith who fell for just 15 to Patel, after being caught by Gurkeerat Singh in the seventh over. Just a run later, it was Dinesh Karthik, who fell for a mere couple, after being cleaned by Patel, followed by Dwayne Bravo off the next ball for an unfortunate duck., thus putting him on a hat-trick off the next ball of his fresh over, as it was in the 11th over he dismissed Ravindra Jadeja for just 11, after being caught behind by Wriddhiman Saha, thus competing his hat-trick, and ending an 18-run stand between Jadeja and Ishan Kishan.

As the score touched 86, it was Kishan, who fell for 27 off an unfortunate run out, as a 29-run stand along with James Faulkner came to an end. It was followed by a strong 39-runs stand between Faulkner and Praveen Kumar, before Kumar fell for just 15 to Mohit, after being caught by KC Cariappa in the 19th over. The second ball of the last over saw Faulkner falling for a healthy 32 to Sandeep Sharma, after being caught by David Miller, as KXIP steered to a comfortable 23-run win. 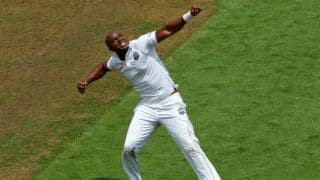