Cook said he understood the annoyance of fans over Pietersen's axing.

England captain Alastair Cook has given his backing for the “brave call” to end the international career of Kevin Pietersen.

Despite being England’s leading run scorer across all formats, South Africa-born batsman Pietersen was axed by the England and Wales Cricket Board (ECB) in February following the team’s 5-0 Ashes thrashing in Australia.

But exactly why he was sent into seemingly permanent international exile remains a mystery, with ECB statements citing a need for team “rebuilding” and “trust” raising more questions than answers.

Test and One-Day International (ODI)  skipper Cook, to his evident discomfort, was unable to shed any more light when speaking publicly for the first time about Pietersen’s axing during Essex’s media day on Tuesday.

But left-handed opener Cook was in no doubt the correct decision had been taken even though in 2010 World Twenty20 winner Pietersen’s absence — and that of Cook, who doesn’t play in the format — the side bowed out of this year’s edition with an embarrassing dead-rubber defeat by the non-Test playing nation Netherlands in Bangladesh on Monday.

“It was a brave call which took guts and consideration,” said Cook of the decision to ditch Pietersen.

“You do have to say at some point, ‘This is the way we’re going to do it moving forward.”‘

Something clearly deteriorated in the relationship between Pietersen and Cook given the latter’s role in bringing the star shotmaker’s role back into the England fold after he was temporarily banished following his fall-out with then captain Andrew Strauss in 2012 which came after several disagreements with Andy Flower, the coach at the time.

Cook hinted at the current problem on Tuesday by saying: “We all know how important team culture and team unity is. It was obviously a very big and important decision.”

But he was unable to put the topic to bed, with some members of the England hierarchy having previously indicated they are barred from saying anything specific about Pietersen’s exit because of legal reasons.

Cook said he understood the annoyance of England fans, bemused at why a world-class player and the team’s leading run-scorer in Australia, was no longer part of the set-up but pleaded for patience and said the truth would emerge soon.

“I know things will become clearer in a little bit of time.

“I know it is frustrating. It is frustrating for me, because I have not totally been able to tell my side of the story. People just have to be a little bit patient.

“Everyone is going to keep asking that question until we give the answers — but at the moment we just can’t.”

Limited overs coach Ashley Giles remains the favourite to succeed Flower, who stood down after the Ashes whitewash, as England’s new head coach, despite the Dutch debacle.

However, Cook added: “The final decision is with the board, that is their job.”

“[But] there are a huge number of reasons to be optimistic. It will take time and hard work to turn it around.

“It took us three or four years to become the top-ranked Test side in the world under Flower and Strauss after we were bowled out for 51 in Jamaica.

“It’s going to take a lot of blood, sweat and tears to get there [again].

“I’m very privileged to be a part of that and hope we can make the difference.” 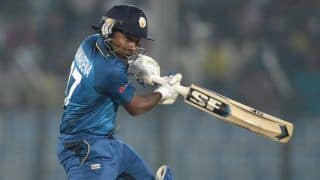