England have done very well and have more or less saved the match.

England finish Day Four of the first Test at Lord’s at 429 for six and have secured a lead of 295 runs after an unbeaten century from Alastair Cook. Ben Stokes had earlier scored 101, which is the second fastest century by an England player and the quickest century at Lord’s. Tim Southee and Matt Henry picked up two wickets apiece with Mark Craig and Trent Boult finishing with one wicket each. Full updates: England vs New Zealand 2015, 1st Test at Lord’s

Stokes was the star of the day as he took on all the bowlers as soon as Joe Root was dismissed for 84, which is his second fifty in the match. Root put on 158 runs for the fourth wicket for England, which got England back into the game. After this, Stokes began the onslaught and he along with Cook have taken the game completely away from the Kiwis. Full scorecard: England vs New Zealand, 1st Test, Lord’s, Day 3

New Zealand in their first innings had scored 523 in reply to England’s first innings score of 389. Kane Williamson had scored 132, to help his side to a commanding total and in the process taking a lead of 134 runs. New Zealand picked up a couple of wickets on Day Three in the form of Adam Lyth and Gary Ballance. Ian Bell then played a composed innings but he too was dismissed for 29.  Ben Stokes scores 2nd fastest century for England during Day Four, 1st Test against New Zealand

New Zealand on Day One had won the toss and elected to bowl first. Lyth, Mark Wood make their debuts in the match for England and Matt Henry made his first appearance in Test match cricket. 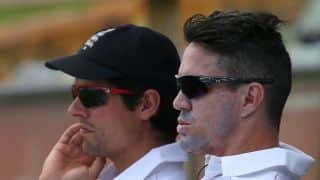