With the start of another home Test series for India, former England captain Michael Vaughan has come up with a combined XI from India and England with his own experience and knowledge of the game.

The year 2016 is probably the year of picking XIs. Be it current of former cricketers or any any expert, there have been numerous XIs that have come with different criterion. With the start of another home Test series for India, former England captain Michael Vaughan has come up with a combined XI from India and England with his own experience and knowledge of the game. Vaughan talked about XI in his recent column for The Telegraph. The XI is picked from the players who are currently playing in the ongoing series. The team surely looks very strong with the inclusion of some interesting players. Full Cricket Scorecard: India vs England 1st Test at Rajkot

Starting from the opening slot, Vaughan picked England’s current Test captain Alastair Cook but none from Indian openers as he selected Cheteshwar Pujara as his second opener. At number three, England’s backbone and rising star Joe Root is there to strengthen the middle order followed by Indian captain Virat Kohli at number four. Moving further, Ajinkya Rahane gets fifth position , who is among the most important batsmen of the Indian side and also the vice-captain of the team. Rahane recently played some excellent knocks and it his Test career and has been on the rise since he made a century at Lord’s in 2014.

Ben Stokes is the all rounder Vaughan has picked in the team, who is quite effective with both bat and ball. He has played 27 Tests so far and has the highest score of 258, which came against South Africa, earlier this year. Coming to wicketkeeper, who is the most important part of the team, Vaughan has picked Jonny Bairstow, who has done exceedingly well with both bat and gloves. He recently broke Andy Flower’s record of scoring most runs by a wicketkeeper in a calendar year.

The bowling department of this team begins with India’s ace spinner Ravichandran Ashwin, followed by Ravindra Jadeja. Both can bat well also, which makes the batting pretty deep for this team. The pacers are James Anderson and Mohammed Shami, who are capable of bowling with sheer pace and swinging the ball in any condition. 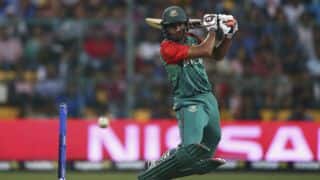