Strauss told Pietersen that a "massive trust issue" prevented him being recalled to England.

London: England captain Alastair Cook insisted Wednesday he had issued no ultimatum that led to Kevin Pietersen’s ongoing exile from the national side.

After Andrew Strauss, the England and Wales Cricket Board’s new director of cricket, confirmed Pietersen would remain in the international wilderness — where the star batsman has been for some 15 months since the team’s 5-0 Ashes thrashing in Australia — reports emerged that Cook had issued a ‘him or me’ ultimatum to his new players and had threatened to resign if the South Africa-born Pietersen was recalled to the side.

However, Cook, speaking to reporters at Lord’s on Wednesday, said the decision over Pietersen had been taken by Strauss and new ECB chief executive Tom Harrison alone. “There was no ultimatum. I can deny that,” said Cook. “I don’t know quite where that came from. There is nothing we can do about it as players. The decision has been made, by Andrew Strauss and Tom Harrison,” the opening batsman added ahead of Thursday’s first Test against New Zealand at Lord’s.

But although he wasn’t a party to the decision, Cook said he supported Pietersen’s continuing absence from the England team. “I do agree with the decision, yes,” he said. “But the decision was made by those two (Strauss and Harrison). That’s what their new roles are, and they made that very clear when they were talking to the team. This thing has gone on for 15 months now, and we’ve got to start looking forward as a side.”

“But they are the decisions that have happened. We’ve just got to focus on the cricket and look forward to what’s going to be a fantastic summer of cricket. We weren’t consulted (about Pietersen) and we’ve got to start looking forward now. The story has been put to bed by the ECB. I’m responsible for the team out on the field and the 10 other guys who are going to be with me on another fantastic occasion at a great ground,” Cook explained.

As for working with Farbrace, while England continue to look for a permanent successor to Moores — with former Australia fast bowler turned Yorkshire coach Jason Gillespie a leading candidate — Cook said: “It’s another challenge, to have an interim coach. “I think it’s my fourth (coach) as a captain over the last two years. There are always challenges to deal with, and it’s great to have Farby here.”

Strauss told Pietersen, his predecessor as England captain, that a “massive trust issue” prevented him being recalled for this season’s home internationals with New Zealand and Australia. That appeared to contradict earlier comments from new ECB chairman Colin Graves that a return was possible if Pietersen scored enough runs in county cricket.

Unfortunately for Pietersen, and indeed the image of the ECB, Strauss told him he would remain frozen out of England contention shortly after the 34-year-old had scored his maiden first-class triple century, during Surrey’s County Championship match against Leicestershire at The Oval.

Pietersen, currently sidelined with a calf injury, reacted angrily and he suggested Wednesday that his ongoing omission from the side might hamper England’s search for a new coach, with Farbrace the only candidate willing to take the job while he was still barred from the international set-up.

“He might be the only one who wants to use a team that’s not allowed to be at full strength,” Pietersen, the only qualified England player the selectors cannot pick currently, told breathesport.com. 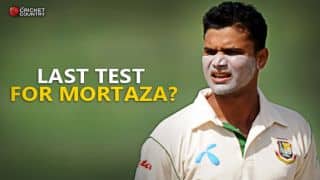 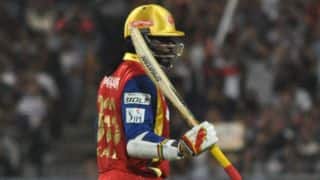