"something needs to be done" about the barrage of criticism, says Cook.

Alastair Cook has said “something needs to be done” about the barrage of criticism he has received over his captaincy of the England team from the likes of Australia great Shane Warne. During England’s 5-0 Ashes series loss ‘Down Under’, Cook’s generally conservative approach came under fire from legendary leg-spinner Warne.

Regarded as one of the best tacticians of his era, Warne, who previously called for Cook to be replaced as captain, wrote ahead of the ongoing series between England and Sri Lanka in his June 11 column in Britain’s Daily Telegraph: “If Cook wants to stay boring and be the same old England by bowling wide of off stump and trying to build up pressure slowly then he has chosen the wrong path.”

“If Cook wants to stay boring and be the same old England by bowling wide of off stump and trying to build up pressure slowly then he has chosen the wrong path.”

Cook, however, was inventive in the field during a thrilling drawn first Test against Sri Lanka at Lord’s where his side were just one wicket away on Monday from a stunning win.

The 29-year-old Cook, speaking to BBC Radio on Thursday ahead of the second and final Test against Sri Lanka at Headingley, was asked how he felt about comments from various pundits in general and the “voluble” Warne in particular.

“Well something needs to be done because in three years I’ve been England captain I have just, in my eyes, been criticised for a hell of a lot of that,” said Cook.

“Yes, when we lose games of cricket as a captain you get criticised but I’ve also won a lot of cricket games for England, won more one-day games than anyone as England captain, won an Ashes, won in India away and that’s what I’m proud of as well,” the Essex left-handed opener insisted.

“So to be criticised for three years, totally, with those results, I find quite hard to take to be honest with you. He added: “Support and positivity is what this England team needs.

“The crowd at Lord’s were brilliant, the public there were fantastic behind the lads and they really drove off it and a bit more support like that will hold everyone in good stead.” Asked if he felt the criticism was “personal”, Cook replied: “Yeah, I think it is.” 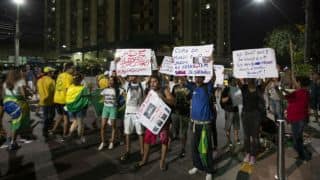