England captain Alastair Cook felt that his men held onto their nerves in his side’s nine-run victory in the first ODI against India at Rajkot. 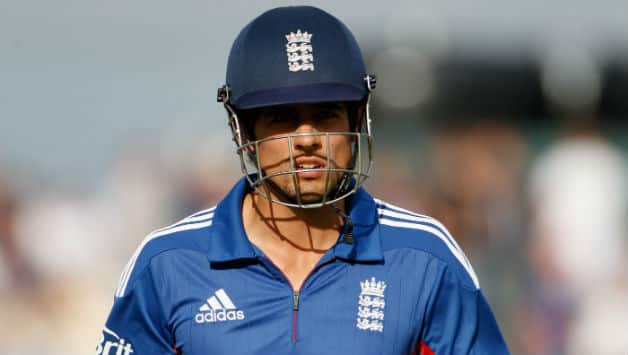 England captain Alastair Cook felt that his men held onto their nerves in his side’s nine-run victory in the first ODI against India at Rajkot.

“When you’ve [a team has] got to chase 325 on that wicket, you’re going to score a few runs. It’s very hard to stop that. I thought we didn’t get too carried away by their start. I think they got 60-odd, so I thought we did really well. And then obviously, we know what Tredders [James Tredwell] does. To get four [wickets] from there is really a brilliant effort.”

England have continued their sparkling form in India as they drew first blood in the five-match ODI series against India.

“It is important, for the main reason that it gives us the confidence. I mean it’s pretty much the same squad that we had last time out here when we lost 5-0. So to get an early win, especially in the first game, it proves that we can play in these conditions.

You know it’s hard, you know it’s tough and it’s different – but I thought the way we fought out there, we’re going to have to do there again in the next games. But more than confidence, the key is your skills. I thought we did that okay today. We can always get better. Holding your nerve in these conditions, especially as bowlers, is very tough.”

Despite the win, Cook does not want to get carried away and still believes his side is the underdog in the ODI series.

“I think we’re still clear underdogs just because of the fact that this is India’s home conditions and they’re so strong in their home conditions. But it was a really good 50-overs game for us. We’re going to have to refresh well and keep practicing as hard as we can. And try and deliver in the middle.”

India-England ODI at Kochi will be a high-scoring encounter, feels S Sreesanth

Jade Dernbach to appear as witness in Tom Maynard's inquest