Alastair Cook reckons that there are a lot of "grey areas" as to what exactly would be considered ball tampering and ICC needs to come clear on that.

Mohali (PTI): England captain Alastair Cook reckons that there are a lot of “grey areas” as to what exactly would be considered ball tampering and ICC needs to come clear on that. With Faf du Plessis being docked 100 percent after being seen applying saliva from a sweet mint that he was chewing and the alleged footage published in a British tabloid of Indian captain Virat Kohli applying saliva has been a topic of discussion for the last few days. When Cook’s opinion was sought, he gave an elaborate reply: “I think the players are just looking for the ICC to clarify what is acceptable and what isn’t. If a guy is chewing a gum or just throwing jelly beans in his mouth at drinks break and then happens to shine the ball in the next over, it becomes a very grey area.” LIVE SCORECARD, INDIA vs ENGLAND, 3rd TEST AT MOHALI

“If the ICC is saying you must not put your finger on the sweet and then straight onto the ball then it might clear it up. I don’t know if it helps or not, to be brutally honest.”

Jos Buttler, who had some good matches for Mumbai Indians and has been a fantastic limited overs player for England, has been inducted into the playing XI in place of an out-of-form Ben Duckett.

“Jos is an extremely talented cricketer and we’ve all seen that in the One-day and Twenty20 format. He’s right up there with the best short-form players in the world and he has earned an opportunity to come and play here. It’s clearly not ideal because of circumstances and he has not played a lot of red-ball cricket but sometimes when the pressure’s off and you just go out and play you can do something special. Jos will bat at No 7 with Mo (Moeen) at four and Jonny (Bairstow) at No 5,” Cook revealed the batting order.

Stuart Broad’s absence will certainly hurt their chances feels Cook. “Stuart’s definitely out. It is a shame after the way he bowled in that last innings and you wouldn’t know that his foot was as bad as it was but the specialist’s advice is that there is a risk of it going totally and he would be out for a period of time. They were quite surprised how well he got through those four and a half days after doing it in the third or fourth over.

“Knowing that (Broad’s injury) , if he played here and did a lot more damage to the tendon in the second over then you’d look stupid.” 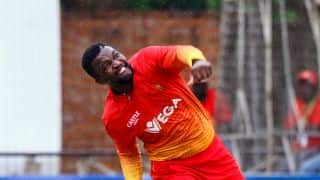