Alastair Cook was adamant he would ‘never quit’ as England captain after the side suffered a fresh series reverse by a desperately narrow margin against Sri Lanka at Headingley on Tuesday.

It seemed England might escape with both a drawn match and series as No 11 James Anderson defied Sri Lanka’s bowlers for some 20 overs.

But with just two balls left in the match, he couldn’t evade a well-directed Shaminda Eranga bouncer and was caught at leg gully with Moeen Ali, who’d kept Sri Lanka at bay for six-and-half hours on 108 not out at the other end — his maiden Test ton.

Victory gave Sri Lanka the two-match series 1-0, after the Islanders themselves had battled to a draw with just one wicket standing at Lord’s, and saw a tearful Anderson, who blocked 54 balls before falling to the 55th he faced, sink to his knees in disbelief.

England, set 350 to win, had been bowled out for 249 and for a ‘new-look’ side there was the same old feeling of loss following the team’s 5-0 Ashes thrashing in Australia under Cook’s leadership.

– ‘Leave everything out there’ –

However, a defiant Cook insisted: “I’ve never quit on anything I’ve done. I’ve given it my all, all the time. Every 104 games I’ve played for England, I’ve left everything out there.

“It’s the same situation here. Until that moment somebody tells me they don’t want me to be captain, I’ll still be here,” the 29-year-old left-handed opening batsman added.

Cook, who has now gone 24 innings since compiling the last of his England record 25 Test hundreds, appeared to be close to the end of his tether even before this match when he said “something needs to be done” about the persistent criticism of his captaincy by Australia great Shane Warne.

But this match only served to increase the scrutiny of Cook’s tactics, with England failing to attack Angelo Mathews while the Sri Lanka skipper played a match-changing innings of 160 on Monday.

England’s main concern for much of Mathews’s century lay in getting Rangana Herath on strike, only for the left-arm spinner to make an invaluable 48 in a key eighth-wicket stand of 149 with his captain.

England then collapsed to 57 for five before the close of Monday’s fourth day, a position which left a rearguard action as their only realistic goal.

The form of Cook, one of a quartet of top-order batsmen undone by previously little-known paceman Dhammika Prasad, was labelled a “recipe for resignation” by ex-England skipper Geoffrey Boycott, himself a former Test opener.

However, Cook — speaking a fortnight before the start of a five-Test series at home to India — said: “I’m incredibly proud to be England captain.

“I’ve been selected to do it. If someone decides I’m not the right person for the job, and the results don’t justify me doing it, then fine.

“Until that moment, I’m desperate to try to turn English cricket around.”

Reflecting on Ali’s century, which came in just the Worcestershire all-rounder’s second Test, Cook said: “It was an incredible effort today — Mo’s [Moeen Ali] hundred, for a free-flowing batsman to be so controlled, measured and calm under that pressure.”

However, Cook conceded England had played a key part in their own downfall at Headingley.

“We lost this Test match with a really bad day yesterday [Monday].

“We had one of our worst days, with both bat and ball, and lost this game because of it.

“Obviously, as a captain, you are responsible.

“We didn’t bowl very well. We knew we had to bowl that fuller length…we knew what we were trying to do, but we just didn’t get it right.”

As for Anderson’s tears, Cook said they were evidence of England’s desperate desire to do well.

“Jimmy [Anderson], right at the end, I think that just shows to everybody who doesn’t really know us as blokes what it means to play for England.” 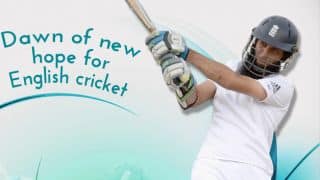