Alastair Cook hammered an unbeaten 163 on the second day of England's three-day practice match against Sri Lanka Board XI in Colombo on Friday. 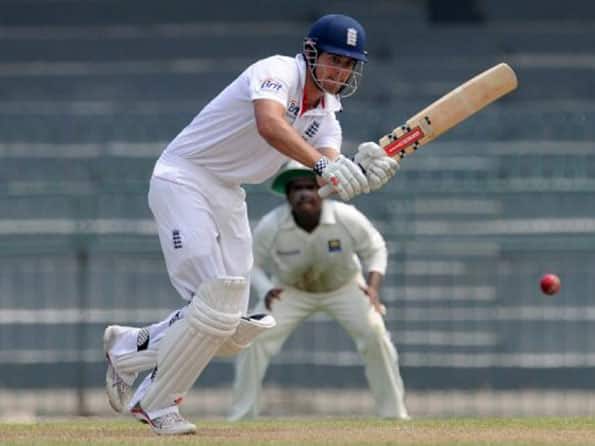 Alastair Cook plays a shot during his innings of 163 AFP

Alastair Cook hammered an unbeaten 163 on the second day of England’s three-day practice match against Sri Lanka Board XI in Colombo on Friday.

The left-handed opener defied the stifling heat and humidity for six hours to strike early form ahead of the two-Test series against Sri Lanka starting in Galle on March 26.

The tourists ended the day at 303-8, a lead of 134 over the home team’s first innings total of 169, giving themselves a good chance to force an outright win on the last day.

Skipper Andrew Strauss hit 40 in an opening stand of 89 with Cook, while Kevin Pietersen made a fluent 39 with five boundaries.

But there was little joy for the other batsmen as Jonathan Trott fell for 16 and Ravi Bopara made 12, while Ian Bell and Matt Prior failed to score.

The first Test at the Galle International Stadium will be followed by the second Test at the P. Sara Oval in Colombo from April 3.