Mohammad Aamer has praised the way former England captain Alastair Cook welcomed him to Essex ahead of his upcoming debut with the English county.

Pakistan bowler Mohammad Aamer has praised the way former England captain Alastair Cook welcomed him to Essex ahead of his upcoming debut with the English county. Left-arm paceman Aamer joined Essex after helping Pakistan win the Champions Trophy, with the 25-year-old taking three for 16 in Sunday’s stunning 180-run demolition of India in the final. He is expected to play in Monday’s County Championship fixture against title-holders Middlesex, having seemingly earned his redemption following a spot-fixing ban in 2010 that brought a five-year ban and nearly ended his career. ALSO READ: Mohammad Aamer set to debut for Essex in English county

After his return, Aamer was granted a visa to tour England last year which prompted England opener Cook to declare match-fixers should be banned for life to protect cricket’s integrity. But Aamer, who signed a deal to join Essex back in November, said there was no hostility between himself and Cook and insisted their relationship is already “very good”. “I met him the first day when I arrived and he was very nice,” said Aamer. “He said to me, the funny thing, ‘I want to learn Urdu (Aamer’s native tongue), so you have to teach me’.

“No (there are no issues between us), nothing. He’s always nice and always very supportive. Everybody knows he’s a good batsman and a very nice human being, so I think it will be a very good journey with him. The way the people treat me, they are very nice to me; the way they gave me a reception was very, very inspiring for me.”

Aamer admitted his starring display at The Oval against India had given him a real jolt and hopes that success will translate into a successful summer in English domestic cricket.

“That was a career booster. The way I performed in the final for my country feels very, very good, I don’t have words for that,” said Aamer.

“After the way we won the final, your confidence will go up, and I will use that, definitely.

“It will be a very good summer for me; my first time playing county cricket. I’ve met good people here and hope it will be a good journey.” 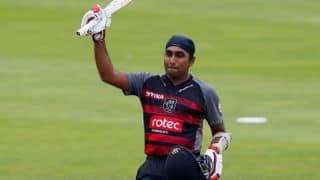