The ECB has removed Alex Hales to ensure the England team is free from any distractions .

Alex Hales has been dropped from all England squads following his drug-related bans, which rules him out of the 2019 ICC Cricket World Cup.

The England & Wales Cricket Board said on Monday that Hales has been withdrawn from England’s provisional 15-man squad for the World Cup to ensure that the team is “free from any distractions” ahead of this summer’s mega event.

The 30-year-old was last week sanctioned under the ECBs disciplinary policy for a second time, and is currently serving a 21-day day suspension for an off-field incident involving recreational drug use.

“The decision has been taken by the ECB managing director of England men s cricket and the England national cricket selectors, having considered what is in the best interests of the England team,” read an ECB statement on April 29. “Consideration was given to creating the right environment within the team and ensuring that there are no unnecessary distractions and that the team is in the best position to succeed going into this crucial period.”

A spokesman for Hales last Friday confirmed the Nottinghamshire batsman had been suspended following an off-field incident last year .

Despite being on what was initially reported as a self-imposed break after being named in England s preliminary 15-man World Cup squad, Hales was due to join the team for a training camp in Cardiff.

He has played 70 ODIs for England in which he has scored 2419 runs with six centuries and 14 half-centuries.

“I want to make it clear this is not the end of Alex’s career as an England player,” added ECB chief Ashley Giles. “The ECB and the PCA will continue to aid Alex and work alongside his county club Nottinghamshire to give him the support he needs, to help him fulfil his potential as a professional cricketer.”

Last year, Hales was suspended and fined by the ECB following his involvement with Ben Stokes in an incident outside a Bristol nightclub during September 2017. 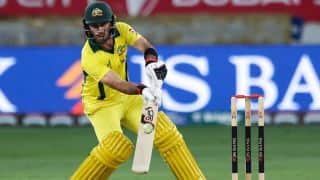