It was another left-arm spinner’s day in the Tamil Nadu Premier League on Tuesday. R Alexandar spun a web of discomfort around Ruby Trichy Warriors at the India Cements Limited- Sankar Nagar ground here to claim five wickets for nine runs and help Chepauk Super Gillies log their first victory of the season.

The 23-year-old Alexandar’s analysis of 4-0-9-5 was the best in TNPL history surpassing RTW captain Sai Kishore’s 5-13 at the MAC Chidambaram Stadium, Chennai in 2017. Interestingly, Sai Kishore was then a CSG player and his feat came against Karaikudi Kaalai.

CSG, who made 148-6 after being asked to bat first, rode on Alexandar’s brilliance to down RTW by 41 runs.

The diminutive spinner was pressed into the attack in the third over by captain Kaushik Gandhi and he justified the faith by running through the RTW batting, who badly missed the services of Murali Vijay. Alexandar claimed the first four wickets in an incredible spell of 3-0-6-4.

On Monday, Dindigul Dragons’ left-arm spinner M Silambarasan had cast a spell on Siechem Madurai Patriots and on Tuesday it was Alexandar’s turn. The Ramanathapuram lad who had been impressive (4-0-11-4) in CSG’s 10-run defeat to Dindigul, now tops the wicket-takers list this season. In two matches, he has bowled eight overs, conceded just 20 runs and picked nine wickets.

Barring opener Aditya Barooah (29 off 31 balls, 2 fours, 1 six) no other top-order RTW batsmen could get into double figures as Alexandar wreaked havoc.

Earlier, it was a tale of two partnerships for CSG after RTW won the toss and put them in. Opener Ganga Sridhar Raju (26 off 26 balls) and No.3 KH Gopinath (37 off 25 balls) first raised 58 runs for the third wicket off 40 balls to provide the initial surge. All-rounder Harish Kumar (39 ff 23 balls, 1 four, 4 sixes) and Murugan Ashwin (18 off 24 balls) then overcame a middle-order wobble to collect 54 runs for the fifth wicket in 40 balls.

These two partnerships were largely instrumental in pushing CSG to a respectable 148-6 in 20 overs.

Saravana Kumar, however, had his revenge in his next over by claiming both Harish and Murugan off successive balls but by then CSG had got a fighting total on the board. 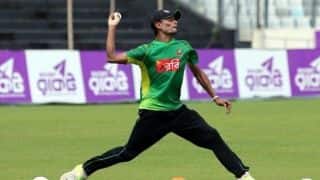 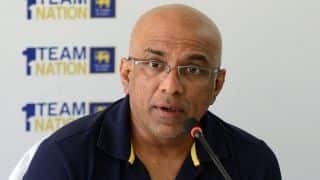