The South African pacer was playing for Somerset against Sussex.

Somerset’s Alfonso Thomas became the first bowler in over a decade to take four wickets with four consecutive deliveries in a First-Class match on Tuesday.

Sussex were 33 without loss on the third day in a First Division County Championship match at Taunton when the 37-year-old Thomas sparked a collapse that saw the visitors lose five wickets in 10 balls without adding a single run.

Cape Town-born Thomas, whose sole international appearance came in a Twenty20 match for South Africa in 2007, began his brilliant burst by bowling James Anyon for 18 and next ball had Rory Hamilton-Brown lbw before former England batsman Ed Joyce was caught behind to complete the hat-trick at the end of the 17th over of the innings.

But if Sussex thought they were about to get some respite, they were mistaken as, four balls into the next over, Peter Trego dismissed Chris Nash with the help of a catch by James Hildreth.

Right-arm seamer Thomas returned and with the first ball of the subsequent over he bowled Matt Machan for a duck.

Somerset, who led Sussex by 75 runs on first innings, were left looking at completing a remarkable victory.

Surrey’s Gary Butcher was the last player to take four wickets in four balls in a first-class match when he performed the feat against Derbyshire at The Oval in 2000. 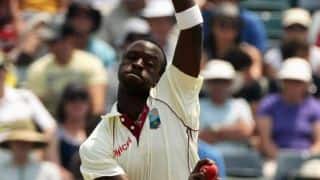