While Karun Nair is disappointed at the lack of opportunities to play for India, all he can do is accept the fate and keep on performing

In only his third Test, Karun Nair became the second Indian cricketer to hit a triple century. Nearly two years since that feat, the middle-order batsman has only managed to play three more Tests for India in an overall tally of six.

While Nair is disappointed at the lack of opportunities to play for India, all he can do is accept the fate and keep on performing. “It’s just the way it is. The team management and everyone else make their decisions and you as players have to respect it and move forward with that. Like I said, all I can do is let the bat do the talking, and I wouldn’t like to say anything else on that,” Nair was quoted as saying by cricbuzz on Saturday.

All lot of talk about Nair has centered around his triple-century against England in December 2016 but the 26-year-old wants to move on from it.

” it’s been two years already and I think it’s time we moved on. The past is gone and we have to look ahead to what’s ahead; I don’t think it should be a disadvantage at all. For all, it can only be an advantage, people know what I can do now, I don’t need to prove it to myself or to anyone that I can score runs at the international level because I have done it before. That kind of self-confidence I have, and I don’t need to prove it to anyone. It’s never going to be a disadvantage because once you get to the top level, it’s all about working hard, getting better everyday, and making sure you grab your opportunities.

Nair, who averages 51.09 in 61 first-class matches, is still motivated to keep on improving and waiting for the opportunity to score big again at the international level.

“For me, it’s not very difficult to motivate myself. I want to keep getting better every day and that was the case whenever I was in the team be it fitness, be it my batting or be it my fielding. All the time I was just trying to improve my skills. Obviously, I want to get an opportunity soon, I want to get a big score soon, I am very hungry for that and everyone knows that only two people [Indians] have got a triple hundred. I am one of them. I don’t have to prove anything to anyone … all I want is to get out there and I am as hungry as ever to do it again,” he said. 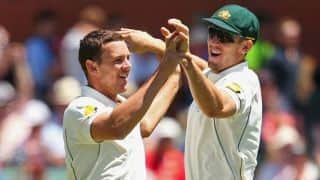