Australia and West Indies have advanced to the ICC U19 Cricket World Cup Super League from Group B.

Australia sealed a dramatic victory over rivals England to march into the Super League stage of the ICC U19 Cricket World Cup 2020 in Kimberley on Thursday. Connor Sully took 2/39 and then scored an unbeaten 20-ball 35 including the winning runs off the final ball of the match as Australia chased down 253 to beat England by two wickets.

Australia were cruising in their chase at 153/2 when Hamidullah Qadri and Lewis Goldsworthy took a couple of wickets each to trigger a slump.

Australia slipped to 189/7 and when Tanveer Sangha departed in the 46th over, the 2018 runners-up needed 44 more runs to win. Sully held his nerves and smacked three sixes in the 48th over and in the company of Todd Murphy (16 not out), took his team over the line.

“We had a few wobbles in the middle, but the guys set it up, and I guess I took the glory at the end,” Sully said. “It was a must-win game. Credit to the England boys, they put up a good fight. To be honest, I didn’t think we were going do it. I just said see ball, hit ball.”

In the other contest of the day, West Indies continued their spotless run, thrashing Nigeria by 246 runs to enter the Super League stage as group toppers with three wins in as many games. Batting first, half-centuries from Kimani Melius and Matthew Patrick pushed them to 303/8 in 50 overs at the Country Club B Field in Kimberley.

In reply, none of the Nigerian batsmen scored more than 17 runs with four of them registering a duck. They folded for a sorry 57 in 21.4 overs with Jayden Seales taking 4/19 while Ashmead Nedd returning figures of 3/11.

Half-centurion Patrick also chipped in with 2/16. 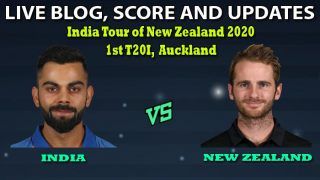