India defeated West Indies by 105 runs (DLS method) to win the second game of the five-match ODI series. After rain led to the series opener being abandoned, it again made it’s presence felt by triggering a delayed start. As a result, the match was reduced to 43 overs per side. West Indies proved to be a no-match to the Indians as the visitors made light work in all departments. Opting to bowl, West Indies were kept at bay as India posted 310 for 5 riding on Ajinkya Rahane‘s century and fifties from Shikhar Dhawan and Virat Kohli. In pursuit of 311, hosts’ innings was single-handedly led by Shai Hope (81), but his departure ensured the home side finished second. Kuldeep Yadav and Bhuvneshwar Kumar’s breakthroughs handed an easy win to tourists. Full cricket scorecard: India vs West Indies, 2nd ODI

West Indies were reduced to 4 for 2 in chase of 311. Kieron Powell and Jason Mohammad went back to the hut without opening their account. Nonetheless, the innings was led by Hope and Evin Lewis’ 89-run stand for the third wicket. Hope was destructive as he bought time against the pacers and smoked Indian spinners in all corners. Lewis also joined him before falling for 21. Kuldeep dismissed Lewis after being taken to the cleaners by the duo.

Lewis’ departure added pressure on Hope, but the youngster responded well. He continued the strokeplay with confidence and was inching close to his maiden ODI ton. However, at the team score of 112, he was trapped lbw for an 88-ball 81 which ensured smooth progress for India from thereon. Ravichandran Ashwin got rid of Jonathan Carter, whereas Kuldeep dominated since then after being struck for boundaries in initial overs. The writing was on the wall for West Indies and their lower order managed to take them over 200. Roston Chase remained unbeaten on 33 whereas Jason Holder made a run-a-ball 29.

Earlier, Indian openers continued to make merry on the 22 yards. Rahane and Dhawan looked in sublime touch and brought up their consecutive century stand in the series. Dhawan fell for 63, but Kohli-Rahane kept the scoreboard ticking. Rahane was the aggressor by sticking to the basics and notched up his third ton, first versus West Indies, before becoming only the second Indian opener to slam three-figures in West Indies in the format. Kohli’s 66-ball 87 propelled India over the 300-run mark which proved to be sufficient against the low-ranked side.

With this emphatic victory, India now lead the series 1-0. 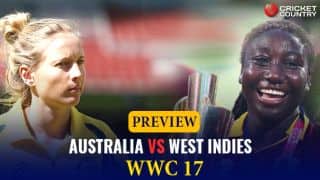