Mohammad Hafeez backed up his 4/41 with the ball with a superb century to help Pakistan beat Sri Lanka in 1st ODI at Dambulla.

Pakistan beat Sri Lanka in the first of the five One-Day Internationals (ODIs) at Dambulla on Saturday. It was a field day for Mohammad Hafeez who backed up his four-wicket haul with the ball with a fine and attacking century with the bat to give Pakistan a 1-0 lead in the series as they chased down 256, in just 45.2 overs with six wickets in hand. Live Cricket updates: Sri Lanka vs Pakistan 2015, 1st ODI at Dambulla

Pakistan were cruising at 47 for no loss at the end of nine overs and that prompted Angelo Mathews to bring himself on and that resulted in the wicket of Azhar Ali. Ahmed Shehzad yet again got a start but was caught behind for 29. Shehzad was distraught about getting out but  that is all he could have done after playing a rash shot.

Babar Azam like the rest of the batsmen got a start but was out leg before to Tillakaratne Dilshan. Nothing stopped Hafeez though from finding the gaps and scoring runs at will. He was particularly severe on Seekuge Prasanna. He brought up his 26th ODI half-century.

Hafeez kept taking the attack to the opposition and found the boundaries like fish to water. He put up 75 runs with Shoaib Malik to ensure Pakistan got closer to the total. Hafeez brought up his 10th ODI ton and it was a fine knock from him on a deck which had something for the bowlers and all other batsmen struggled for fluency. Live cricket scorecard: Sri Lanka vs Pakistan 2015, 1st ODI at Dambulla

Hafeez though departed just after getting to his ton when he was caught and bowled by Thisara Perera. Mohammad Rizwan joined Malik. Malik scored a fifty and saw Pakistan through to a clinical win by seven wickets and take a 1-0 series lead.

Earlier, after asking Sri Lanka to bat first, Pakistan almost a wicket in the early over when Tillakaratne Dilshan edged Mohammad Irfan back to the keeper but the decision was reversed since it was a no-ball. Kusal Perera was the first one to depart to Hafeez who took four for 41 to keep his team in the game.

Dilshan did not make it count and was out for 38 to Hafeez. Lahiru Thirimanne and Upul Tharanga both got starts but could not convert them into big scores and Sri Lanka were in trouble at 118 for four. Hafeez had already taken four by then. Skipper Mathews and Dinesh Chandimal then quietly took Sri Lanka into a position of domination with a 82-run stand.  Read: Mohammad Hafeez stars as Sri Lanka post 255/8 against Pakistan in 1st ODI at Dambulla

Just when the host would have wished to take off, Yasir Shah had Mathews caught at wide long on and that triggered a mini collapse. Chandimal went onto score his 14th ODI half-century to ensure Sri Lanka got past 250. He got good support from Milinda Siriwardana who hit a 21-ball 22. Apart from Hafeez, Rahat Ali picked up two for 44 but it was Hafeez who did the most damage and won Pakistan the game. 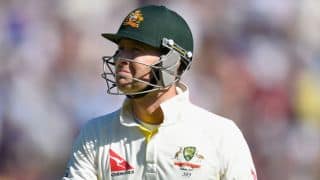 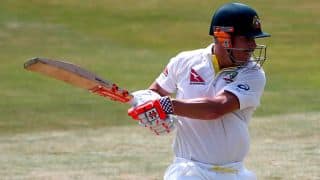