South Africa produced a much-improved batting performance and chased down Zimbabwe s 228 in the final ODI to complete a 3-0 whitewash.

Having struggled in the previous two games, South Africa produced a much-improved batting performance and chased down Zimbabwe s 228 in the final ODI to complete a 3-0 whitewash. Reeza Hendricks and Heinrich Klaasen s half-centuries got South Africa home with four wickets remaining, after pacers Dale Steyn and Kagiso Rabada had shared six wickets earlier in the day to bowl Zimbabwe in the final over.

Reduced to 3/44, Zimbabwe tried to stage a fightback through Brendan Taylor and Sean Williams as the two batsmen forged a promising 73-run stand for the fourth wicket, but once that partnership was broken, there was no coming back. Opening the bowling, Imran Tahir removed opener Solomon Mire in the sixth over. Zimbabwe were struggling in the Powerplay, and at the other end, continuing his fine return in international cricket, Steyn finished with 3/29 removing Sean Ervine for a duck, Peter Moore for 19 and Donald Tiripano for 29.

Rabada wasn t far behind either. Along with Steyn, the 24-year-old bowled with his tail up. He set up Hamilton Masakadza s dismissal through a conventional yorker, yorker, bouncer pattern, and removed the dangerous looking Williams caught and bowled. But despite wickets falling, Taylor and Williams batted defiantly to launch to counter-attack of sorts. During his innings, Taylor became the third Zimbabwe batsman to score 6000 runs in ODIs after brothers Grant and Andy Flower, while Williams struck 10 boundaries during his 79-ball knock. Taylor was eventually out stumped to Tahir.

With Moore and Elton Chigumbura falling in quick succession, it was up to Tiripano and Brandon Mavuta to get Zimbabwe past the 200-run margin.

Aiden Markram and Heinrich batted positively to provide South Africa s best start of the series, putting 75 in 12 overs. Markram batted with a strike rate of over 100 with seven fours but was dismissed for 42 by Williams. Zimbabwe then had their opening when they removed South Africa s two most experienced campaigners Faf du Plessis and JP Duminy in a gap of five runs. At 122 for 3, this was Zimbabwe s chance to cash in, but Klaasen and Hendricks defied them.

Even after Hendricks was given out leg before wicket unluckily to Tiripano, Klassen and Khaya Zondo took South Africa within striking distance with a 66-run stand. Klaasen s 67-ball 59 came to an end attempting a third consecutive four off Kyle Jarvis. Andile Phehlukwayo was then dismissed for a nine-ball duck. At his dismissal, out walked Steyn, coming off a 60 in the previous game, and he sent a ball down the ground to finish the game. 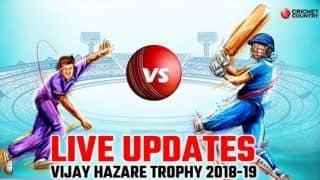 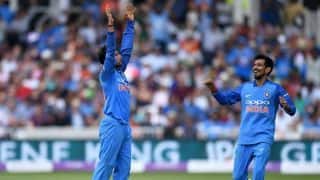