Former South African speedster Allan Donald has emerged as one of the frontrunners to become Australia's next fast bowling coach, even as New Zealand remains keen to retain the pacer's services. 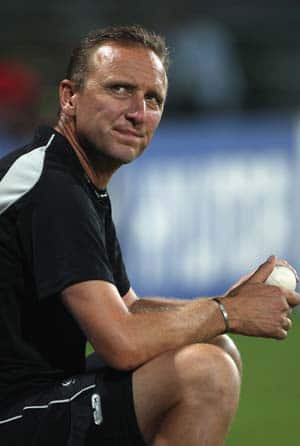 Former South African speedster Allan Donald has emerged as one of the frontrunners to become Australia’s next fast bowling coach, even as New Zealand remains keen to retain the pacer’s services.

Donald, who is currently engaged with a South African TV network at home, is believed to have had his final round of interview with Cricket Australia’s (CA) cricket operations manager Michael Brown earlier this week.

According to media reports, New Zealand Cricket (NZC) has still not confirmed future contract with Test veteran but the head coach John Wright has already showed his desire to continue working with Donald.

The Kiwis have made a verbal offer to Donald and are awaiting his reply, although a NZC spokesman said discussions were “progressing positively”.

Other candidates in contention include former Australian Test paceman Craig McDermott and the unheralded Allister de Winter, who is a bowling coach with reigning Sheffield Shield champions Tasmania.

One of the key roles for the successful candidate will be to instill some confidence in the bowling department and to try and squeeze the best out of a pace attack that lacked penetration during the Ashes series and were also not up to their best during the World Cup.

The 44-year-old, has been in the limelight after he along with head coach John Wright helped a tottering New Zealand side to a series victory against Pakistan before pushing the side to the semi-final of the World Cup.

Donald is also said to have played a major role in the development of Kiwi paceman Tim Southee, who was the third-highest wicket taker at the quadrennial event.

“I think he spent more time looking at the mental side of the game and tactical awareness rather than any great technical direction, but as I understand from John Wright, he was very pleased with the work he’s done, and the bowlers he worked with over there were pretty delighted with having him around,” Buchanan said.