Donald said that there is a bit of concern over Duminy's injury.

Coach Allan Donald has expressed his satisfaction over the performance and workout of his key bowlers, including lead pacer Dale Steyn, in a practice match, but is concerned about the fitness of injured middle-order bat J.P. Duminy.

Speaking on the sidelines of a Proteas versus South African XI three-day warm-up match at the Wanderers Stadium, Donald said that he was pleased with the bowlers getting into quick rhythm.

The composite XI was bowled out for 135 runs, with Quinton de Kock (50) the only batsman to counter the Proteas attack.

Steyn, who was out with a rib injury until recently, picked up three for 40. Left arm spinner Robin Peterson claimed three wickets for nine runs, while Rory Kleinveldt claimed two for 17, reports Sports24.

Donald, however, said that there is a bit of concern over Duminy who retired hurt with a sore wrist.

A further assessment would be made on Thursday. 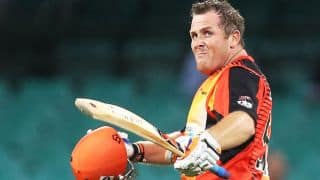