Tallawahs held their nerves to defend what appeared to be an inadequate.

In a rematch of last season’s final, Tallawahs Sunday held their nerves to defend what appeared to be an inadequate 148 for five, holding the hosts to 144 for two off their 20 overs at the National Stadium, reports CMC.

In-form opener Lendl Simmons stroked an unbeaten 68 and captain Denesh Ramdin hit 32, before retiring hurt in the penultimate over from fast bowler Jerome Taylor, with 17 runs required. New batsman Chris Barnwell smote the final delivery over mid-wicket for six, reducing the target to 11 runs from the last over bowled by seamer Andre Russell. Simmons and Barnwell could only muster singles from the first three deliveries and Barnwell’s edge to third man for a couple, left Amazon Warriors requiring six from the last two balls. However, Barnwell missed a swing off the fifth delivery and could only squirt a single to cover off the last ball, as Tallawahs claimed their third win in as many matches.

The right-handed Simmons struck three fours and two sixes off 61 balls while Ramdin counted a four and a six in his 28-ball stay at the crease. They put on 78 for the third wicket, coming together with Amazon Warriors stalling at 54 for two in the ninth over. Even though both weighed in with the odd boundary, Tallawahs dried up the runs as left-arm spinner Daniel Vettori’s four overs went for just 15 runs and South African seamer Rusty Theron conceded just 24 runs from his four overs. Earlier, Man-of-the-Match Chadwick Walton top scored with 53 and Australia’s Adam Voges chipped in with 48, on a day when talismanic captain Chris Gayle failed to fire, falling for 11 off 19 balls. Walton inspired the early scoring while adding 49 from 44 balls with the left-handed Gayle who was first to go, clipping pacer Ronsford Beaton (2-27) to Leon Johnson at mid-wicket in the eighth over.

Owais Shah lasted just three balls before he was bowled by Beaton in the same over, leaving Tallawahs in a spot of bother. However, Walton pummelled six fours and a six in an innings lasting 42 balls while Voges carved out two fours and a six in a busy 43-ball innings, to keep the Tallawahs scoring ticking over. After Walton holed out to long-on off off-spinner Sunil Narine in the 16th over, Voges added a further 40 from 22 balls with Russell who made 15 off 11 balls. 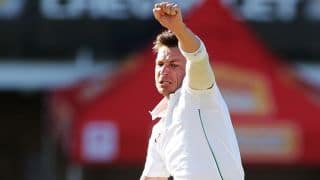 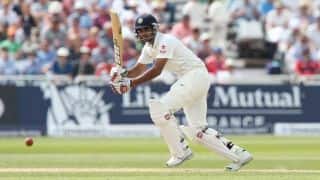