Rayudu partnered Rohit Sharma for a 211-run stand for the third wicket en route to his third ODI hundred.

Prior to the start of the five-match ODI series against West Indies, India captain Virat Kohli had shown faith in Ambati Rayudu to cement himself as India s No. 4 for the World Cup. And on Monday, the 33-year-old answered to his captain s call with a sublime century. In the first ODI in Guwahati, Rayudu had sizzled with 73 but failed to convert his start. Today however, there was no such missed opportunity. Rayudu partnered Rohit Sharma for a 211-run stand for the third wicket en route to his third ODI hundred as India posted a mammoth 377 for 5. They won the game by 224 runs.

Impressed with Rayudu s effort, Kohli, during the post-match presentation ceremony, was happy to see his decision work well. “Rayudu has taken his opportunity with both hands. We need to back him till that big World Cup and give him more confidence. He is feeling good about his game and he is a very confident man. He reads the game really well, so we are happy that someone with intelligence is batting at number four,” Kohli said.

The bigger picture obviously was how clinical India were during the entire game. Chasing a daunting total, West Indies, who have scored two 300-plus totals and one 17 short of it, produced a contrasting batting performance, getting bundled out for 153. Top-order failure, suicidal run-outs and a brilliant spell of bowling from Khaleel Ahmed, who finished with 3 for 13, knocked the stuffing out of the visitors.

“We ticked all the boxes. It was a very clinical game in all three departments. Something that we are very proud of and happy with the fact that we got back into rhythm. Put under pressure by Windies in the last game but we are known to bounce back and it was another example of that,” Kohli said.

West Indies were reduced to 20/3. From there, Marlon Samuels and Shimron Hetmyer added 25 more before it was Khaleel s turn to cash in on West Indies poor start. He took three balls to remove another thorn in India s eyes Hetmyer out leg-before wicket, a review not saving him. Two more in the next two saw Rovman Powell and Samuels depart, leaving West Indies chase in tatters at 56 for 6. West Indies never recovered from there.

“He (Khaleel) is a very exciting talent. If the pitch has something to offer, he can get the best out of it. Today, he really showed his bowling skills by moving it both ways. Pitching it in the right areas, not too full, not too short as well. I was very happy to see him pick up wickets and making the ball talk,” said the Indian captain. 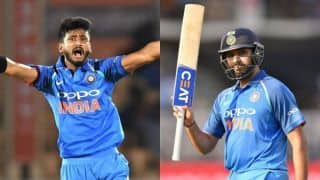 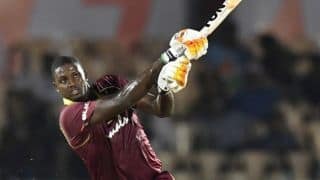 India vs West Indies, 4th ODI: We allowed India to score too many runs: Jason Holder