Rayudu who scored an unbeaten 61 in the 1st ODI vs Zimbabwe completed a 1,000 ODI runs.

Ambati Rayudu, who has performed well for India against Zimbabwe in both the matches of their ongoing three-match One-Day International (ODI) series, has said that he is happy with the way his ODI career has gone so far. Rayudu has suggested that he has the responsibility of scoring runs consistently in this second string Indian side and for doing it he has to stay focussed and take up the opportunities as it comes his way. Rayudu who made his ODI debut back in 2013 completed a 1,000 runs in the ODIs during the first ODI against Zimbabwe where he top-scored with 62 off 120 and helped India chase down 169 with 45 balls and 9 wickets remaining. FULL CRICKET SCORECARD: India vs Zimbabwe 2016, 2nd ODI at Harare

In the second ODI, which was again played at Harare Sports Club, Rayudu was once again remained unbeaten. He scored a 44-ball 41 and this innings was inclusive 7 fours.

According to CricBuzz, the Mumbai Indians wicketkeeper-batsman said, “I am happy with the way I am batting. You know the conditions well but still every year and everytime it’s different. I haven’t looked into the past. I am just playing on what I am facing as per conditions. I have worked on the game also a bit so I am happy.”

He went on to add, “For me generally it’s just about getting my batting in shape. Most of the times, visualisation is the key I feel. Even when you’re out for a long period of time, travelling with the team, I try to keep myself motivated and focussed. I prepare myself before the game as though I am going to play it.” 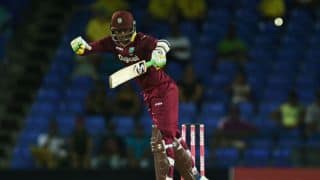