Amelia Kerr, 17, broke a record that was set before she was born.

New Zealand teenager Amelia Kerr shattered a world batting record in women’s ODIs with a blistering 232 not out against Ireland Women on Wednesday. Kerr amassed the record total just days after her team’s 490 for 4 against Ireland set a record for cricket’s highest-ever ODI total. The 17-year-old, whose average was just 29 going into the match, blasted 31 fours and 2 sixes to surpass the 229 scored by Australia’s Belinda Clark against Denmark in 1997 three years before Kerr was born. At 17 years 243 days, Kerr is the youngest double-centurion in international men’s or women’s cricket.

Kerr’s onslaught is also the third-highest individual score by a man or woman in ODI history. Rohit Sharma is at the top of the pile with his 264 scored against Sri Lanka in 2014, while Martin Guptill made 237 against West Indies in the 2015 World Cup.

Kerr was also involved in the second-highest partnership in women’s ODI cricket, as she and Leigh Kasperek (113) put on a mammoth 285 for the second wicket.

“It was pretty surreal. It was just nice to get the opportunity to open and get some time out in the middle,” Kerr told the New Zealand Cricket website. “I had to work hard at the start but once I got through [that], I got going and had a good partnership with Leigh which allowed me just to play how I wanted to play and try to hit boundaries because we weren’t losing wickets.”

Asked if her approach had altered after she reached three figures, Kerr replied: “Not much changed too much; I just wanted to keep batting. I thought, ‘put the bad ball away and keep scoring off most balls’. I knew that the Powerplay was coming so once we got to the Powerplay, with only three out, I was going to try to go hard then.”

Kerr said it was only when she came off the field, to be told by her teammates, that she realised she had rewritten cricket’s record books: “I had no idea. I think I heard them say stuff on the speaker, but I couldn’t hear because everyone kept clapping.”

Kerr’s innings was far and away the largest of a fledgling yet impressive career which had seen her become known primarily as a leg-spin bowler. “I had 152 against Otago Under-21s a few years ago, so this is comfortably my highest score,” she said.

Kerr also starred with the ball, taking 5 for 17 in 7 overs as New Zealand went on to beat Ireland by 305 runs after dismissing the hosts for 135 in Dublin. The win saw the White Ferns complete a 3-0 series sweep over Ireland, with every one of those wins by colossal margins of over 300 runs.

New Zealand now travel across the Irish Sea to face England and South Africa in a T20I tri-series, from June 20 to July 1. The White Ferns then play world champions England in a 3-match ODI series from July 9 to 15. 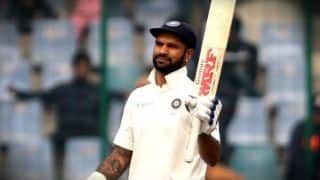