Amitabh Bachchan was charged after it was assumed that he had sung India's national anthem incorrectly during India vs Pakistan in WT20.

Bollywood’s one of the greatest modern actors and legend Amitabh Bachchan was charged on Monday after it was assumed that he had sung India‘s national anthem incorrectly during the crucial India vs Pakistan, Super 10 Group 2, Match 19 at the historic Eden Gardens in Kolkata on Saturday. A complaint regarding the actor was filed at the Ashok Nagar Police Station in New Delhi. Earlier, Ulhas PR, a resident of Mumbai had also filed a similar complaint against Amitabh, claiming that he had sung the national anthem incorrectly on an earlier occasion, during the Pro-Kabbaddi league. It was mentioned in the complaint that Amitabh had used wrong words in the anthem, sung by him, and the duration of the anthem was 1 minute 22 seconds, instead of the original 52 seconds, reports DNA. FULL CRICKET SCORECARD: India vs Pakistan, Group B Match 19 of ICC T20 World Cup at Eden Gardens

It was also reported earlier, that Amitabh had charged Rs. 4 crore for his appearance in the Indo-Pak tie at Eden and to sing the national anthem. However, later Cricket Association of Bengal (CAB) president Sourav Ganguly cleared the air by rubbishing those reports and said that instead Amitabh had invested Rs. 30 lakhs from his own pocket to travel and stay in the ‘City of Joy’. T20 World Cup 2016: Pakistan daily slams men’s team for loss against India; praises women’s team

Meanwhile, Pakistan has fallen well behind the rest of the world in the T20 format, a Pakistani daily said and rued the men’s cricket team’s loss to India in Kolkata. It, however, heaped praise on the women’s cricket team for their win. An editorial “A win and a loss” in The News International said “for only the second time in our long cricketing rivalry with India were we able to beat our enemy at a World Cup.” “There are two World T20 Championships going on right now and both should be getting equal attention,” said the daily. It observed that the boys in green got the pageantry of an opening ceremony with Shafqat Amanat Ali and Amitabh Bachchan singing their respective country’s national anthems, reported IANS. 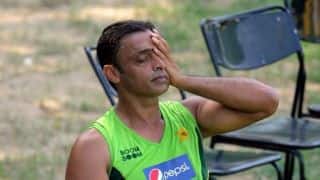