The Executive Committee of the Andhra CA was held in Vijayawada where Ranga Raju was elected President in place of DVSS Somayajulu.

New Delhi: In the wake of Supreme Court order, former BCCI vice-president Gokaraju Gangaraju has quit as secretary of Andhra Cricket Association (ACA) while GVK Ranga Raju has taken over as the head of the state unit. The Executive Committee of the Andhra CA was held in Vijayawada where Ranga Raju was elected President in place of DVSS Somayajulu. Arun Kumar will be new General Secretary while V Durga Prasad as the joint secretary. PV Deva Varma is the new Vice President while KS Ramachandra Rao is the Treasurer. The vacancies are caused by demitting of office by the three office bearers – Somayajulu as President, Ganga Raju as general secretary and MA Rahim treasurer.

“The Co-option took place for the posts of Joint Secretary and Vice President because of the Co-option of Sri G.V.K. Ranga Raju from Vice President to President and Sri Ch. Arun Kumar from Hon. Joint Secretary to Hon. Gen. Secretary,” an ACA release stated. Ganga Raju had earlier demitted office as BCCI vice-president as he had already completed nine years as office bearer of both state and national body. Recently, Lodha Committee has for all future endeavors called on BCCI CEO Rahul Johri to reduce their selection committee to three selectors with Test match experience.The Lodha panel s move came in reply to a query from the BCCI CEO.

Johri, in his letter to the Lodha Committee, wrote, We have to select the Rest of India team for the Irani Trophy and this is normally done on the last day of the Final of the Ranji Trophy match However, please advise if we should call all 5 members or only three members with Test match experience as per the Hon ble Supreme Court order.

The decision was taken at a meeting of the three member committee former Chief Justice of India R.M. Lodha, former Justices Ashok Bhan and RV Raveendran in the national capital on Wednesday. 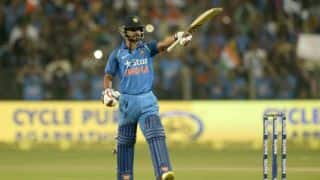