Fletcher said that he hoped the misunderstanding would not affect his future with West Indies cricket.

West Indian cricketer Andre Fletcher, who was fined and arrested for carrying live ammunition, has revealed that the entire issue was merely a misunderstanding on his part. The 27-year-old wicketkeeper-batsman revealed that he had thought the ammo were pellets for his air rifle rather than live ammunition.

Fletcher said that he had no untoward intentions, and that he did not try to hide the fact that he was carrying what he thought were harmless pellets. “I carried the package openly in my hand to and through the airport and subsequently loosely placed it in my carry-on bag as I sought to clear security at the Douglas Charles Airport in Dominica.”

Fletcher, a veteran of 15 ODIs and 22 T20Is for West Indies, said that he hoped the misunderstanding would not affect his future with West Indies cricket. “The unfortunate incident which led to my detention in Dominica on May 28 will not deter me from continuing to represent the region or my country once given the opportunity to do so. I will never intentionally do anything to cause hurt or embarrassment to my nation, my fans or especially my family.” 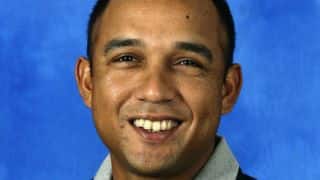