Andre Russell‘s astonishing 47-ball hundred has powered West Indies High Performance Centre (HPC) to an emphatic 117-run victory over Bangladesh A in the first one-dayer. The all-rounder, already a senior West Indies player, finished unbeaten on 132 from a mere 56 deliveries, as HPC piled up 327 for nine off 50 overs Sunday, reports CMC.

In reply, Bangladesh A collapsed from 146 for three in the 27th over to be dismissed for 210 off 41.2 overs. Shuvagoto Hom top scored with a run-a-ball 51 and Imrul Kayes (38) and Marshall Ayub (30) looked good for big knocks but could not carry on.

Seamer and captain Carlos Brathwaite undermined the innings with three for 23 while off-spinner Ashley Nurse claimed three for 45. Opting to bat first, WI HPC appeared ruing their decision when they crashed to 49 for four in the 15thAover, thanks to a burst from Shafiul.

However, Johnson and Walcott then added 91 for the fifth wicket, to lift the HPC beyond the 100-run mark. Johnson faced 81 balls and struck seven fours and a six while Walton went at better than a run-a-ball, counting five fours and two sixes off 59 deliveries.

Both fell within 19 balls of each other to leave the HPC on 163 for six in the 37thAover but Russell then transformed the game. Overall, he belted seven fours and 13 sixes, raising his first 50 off 35 balls and the second off an astonishing 12 deliveries.

In the process, he put on 47 with Brathwaite (20) before adding a whirlwind 95 off 40 balls with Nurse (14). Bangladesh started positively, Imrul Kayes and Abdul Majid (9) putting on 46 off 51 balls before they were removed in the space of 19 deliveries.

Hom then anchored two stands, 40 for the third wicket with Ayub and 32 for the fourth wicket with captain Naeem Islam (12) to keep Bangladesh A in contention at 146 for three.

Nurse’s introduction changed the game, however, as he ripped through the middle order, engineering a collapse that saw the last seven wickets tumble for 64 runs. 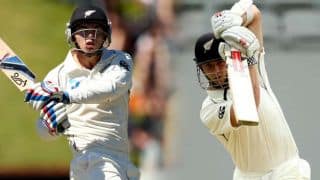