Currently, Ireland are 206 for the loss of four wickets after 39 overs with Niall O’Brien on 64.

Ireland batsman, Andy Balbirnie was dismissed for 24 by off-spinner, Ravichandran Ashwin after being caught by Mohammed Shami, against defending champions, India,  in their Pool B, match 34 of the ICC Cricket World Cup 2015 at Seddon Park in Hamilton on Tuesday. Currently, Ireland are 206 for the loss of four wickets after 39 overs with Niall O’Brien on 64 and Kevin O’Brien coming in. LIVE Updates: India vs Ireland

Earlier, Irish skipper, William Porterfield won the toss and elected to bat first. He makes a change as Stuart Thompson comes in for Andy McBrine, while MS Dhoni decides to field an unchanged squad from the previous game against West Indies. LIVE Scorecard: India vs Ireland

Having qualified for the ICC Cricket World Cup 2015 quarter-final, India would want to strengthen their position with the clash against Ireland at Seddon Park, Hamilton on Tuesday. India have won all their games so far and more victories will give them a certain top spot in Group B. On the other hand, Ireland have three victories in four matches and are looking to qualify for the quarter-final. ICC Cricket World Cup 2015: Complete Coverage 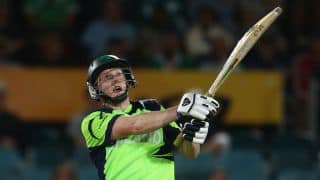