Seam bowler's superb catch in the field to dismiss Mills

The name ‘Andy Bichel’ is synonymous to Australia’s successful run in the late 1990s and early 2000s. When we talk of him, more often we talk about his marathon bowling spells and late strikes with the bat.

However this video is not his ‘bowling moment’, it is his fielding or rather his catching that is been talked about.

In a 10-over match in Hamilton, New Zealand on January 26, 2005, the Kiwis played against FICA World XI in a fundraising effort by cricketers.

New Zealand batting first got off to a rocketing start going around 16 an over. It was the fourth over when Australian Greg Blewett came on to bowl, all the other bowlers before him were thrashed including Sri Lankan Muttiah Muralitharan. Blewett too gave away 16 runs in that over before picking up the wicket of Kyle Mills on the last ball of the over.

Mills went hard on the ball and it flew straight towards the long-off boundary. But fielding there was Bichel, who first jumped and took the catch with his right hand, just at the edge of the boundary rope.

Though he completed the catch, he lost his balance due to momentum and was about to cross the ropes. In a display of brilliant presence of mind, he threw the ball in the air, ensuring it stays within the boundary perimeters, while he crossed the ropes.

He regained his balance and before the ball made contact to the ground, he completed the catch to dismiss Mills.

With advent of popular Twenty20 leagues, these kinds of catches are more frequent but back then it wasn’t expected.

Batting first New Zealand set a target of 178 runs for FICA XI. The match ended in a tie. Bichel opened the innings for FICA XI and smashed 47 before being Mills getting his revenge by dismissing him. 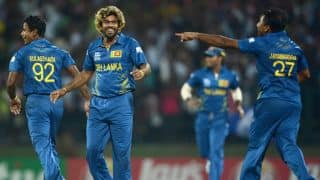