Sri Lanka will be without the services of Eranga in the ODI series against England.

Angelo Matthews recalled his conversation with Shaminda Eranga before the second One-Day International (ODI) against Ireland as he spoke about the shock he felt after Eranga asked him to touch his heart to feel the alarmingly fast. Eranga went out to bat in the first innings and faced a single delivery, the final ball of Sri Lanka’s innings. It was during Sri Lanka’s warm-up in the innings break that Eranga realised something was wrong. While he was rushed to the hospital, his teammates took to the field to play the second innings at Dublin. Sri Lanka beat Ireland by 136 runs. Full Cricket Scorecard: England vs Sri Lanka 2016, 1st ODI at Birmingham

“At the time he called me and said ‘something has happened to me. He was warming up and just before we went on the field, he said something happened to me, can you touch my heart because it is beating fast. I felt something unusual so I quickly called the physio and the physio went for the doctor with him. It was a shocking incident,” the Sri Lankan skipper recalled.

According to ESPNCricinfo, Eranga did not show signs of undue stress before the ODI on Saturday and that doctors have ruled out anxiety as a cause of his condition.

“It has been a tough 48 hours for him. And the whole team is behind him and we are fully supportive of him. It was an unfortunate incident just before we went on to the field.” It’s another unfortunate incident where his action has proved to be illegal and he will have to go back and work with the fast-bowling coaches and come back strong,” Matthews added.

“We are very confident he will come through both – his condition as well as his action – so we are very supportive of him and the whole team are behind him,” he said. Eranga will remain in Ireland until the results of the medical tests are known and after the doctors declare him medically fit, he will then fly back to Sri Lanka. 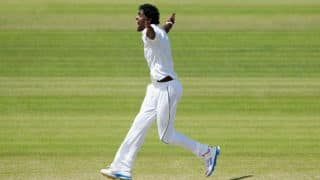